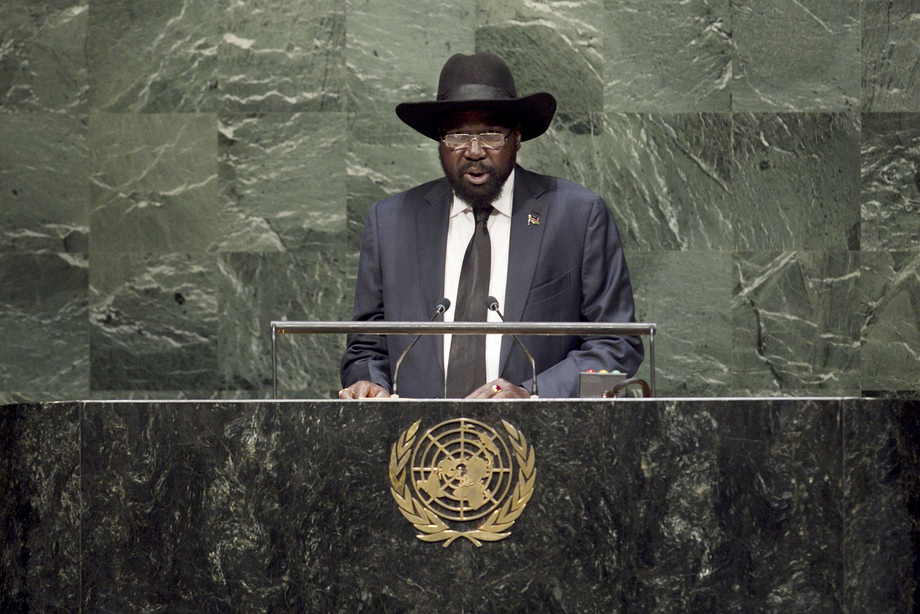 SALVA KIIR, President of South Sudan, said the journey of his people from conflict to peace and from independence to freedom had been costly and characterized by marginalization, a prolonged war, human disasters, loss of millions of lives and untold human suffering.  At its independence, his country had been faced with an inadequate infrastructure, limited human capacity and weak security.

Recalling the violent conflict that erupted in his country in December 2013, he said his Government was unwaveringly committed to resolving conflict peacefully.  The country’s negotiating team had been in Addis Ababa since January of this year to talk to rebels in order to close that dark chapter in the history of the young country.  With the help of mediators, a cessation agreement had been signed by his Government, which reaffirmed its commitment in this past May.  However, rebels had violated it too many times and had refused to sign the document.  The international community, he stressed, must urge the rebels to sign the protocol to the agreement.

He said the conflict in South Sudan was purely a struggle for power and not an ethnic conflict as had been reported.  Citizens displaced by conflict had sought refuge in neighbouring States and in the neighbouring countries.  Those innocent victims of conflict urgently needed and deserved human assistance.  In that regard, he expressed thanks to the Government of Norway for organizing a donor conference to support his country's humanitarian needs and to the United Nations for having organized a high-level ministerial meeting in the same regard.

The conflicts within both South Sudan and Sudan tended to be interconnected, he pointed out.  For that reason, the people of South Sudan would exert more efforts in strengthening their country's relationship with Sudan and to resolve issues through dialogue.

Turning to the United Nations Advance Mission in the Sudan, he said his Government was collaborating with the Mission and other stakeholders to build trust with the internally displaced persons in the Mission’s camp, so that they could return to their homes and conflict-free areas and resume their normal lives.  However, expressing concern with the mandate of the Advance Mission, he requested the United Nations reconsider its mandate during the renewal of the mandate period in November.