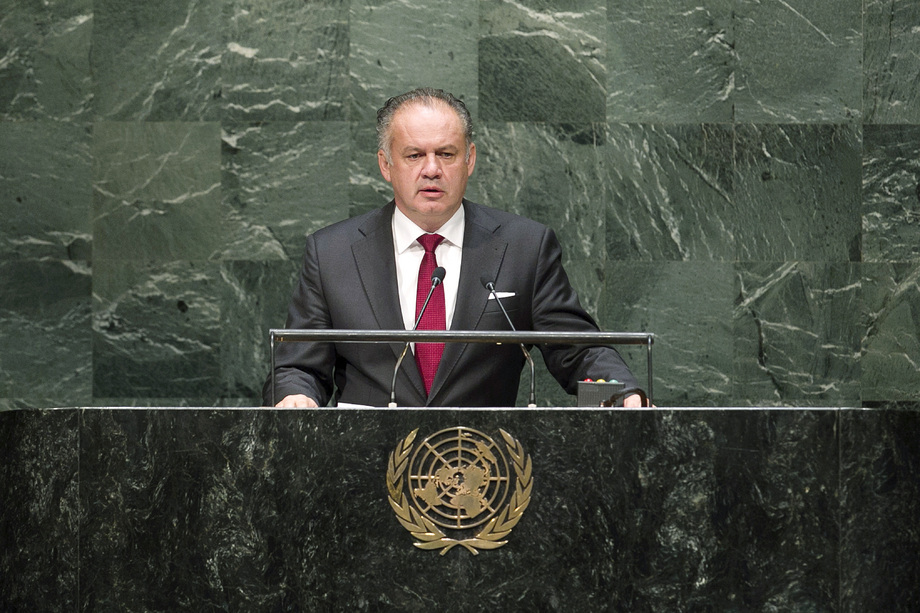 ANDREJ KISKA, President of Slovakia, said that 20 years ago Ukraine had abandoned its nuclear programme in exchange for guarantees of security and territorial integrity. Today, instead of marking the anniversary of that achievement, they were witnessing an armed conflict and political instability. His Government strongly denounced the violation of the territorial integrity of any State, with Ukraine and the annexation of Crimea being no exemption. Only dialogue and a diplomatic solution of the conflict, with Russia’s participation, would lead to sustainable peace in Ukraine.

He further warned that the Islamic State in Iraq and the Levant (ISIL) had become a global threat. Their ideology and acts represented an unprecedented brutality and twisted use of media for self-promotion. They embodied ethnic and religious cleansing that would not stop at the borders of Iraq and Syria, but had the ambition to spread beyond the Middle East. He called on the international community to stand united on Iraq and prevent ISIL from taking hold of the occupied territory and consolidating its military and economic power there.

Moving on to Afghanistan, he expressed his conviction that in the aftermath of the recent presidential elections, the country would be able to create conditions to achieve national and societal unity, and continue supporting international assistance. He was confident that the agreement reached between the two presidential candidates would contribute to the stability of Afghanistan.

He highlighted disarmament as key to eliminating potential sources of tension and conflict. The signing of the Arms Trade Treaty in 2013 had been an important step towards establishing common legal standards for regulating and monitoring the international trade of conventional weapons. As one of the first of 50 countries to ratify that Treaty, Slovakia was hopeful that its implementation would help to eliminate the risk of the illegal arms trade, thus strengthening global security.