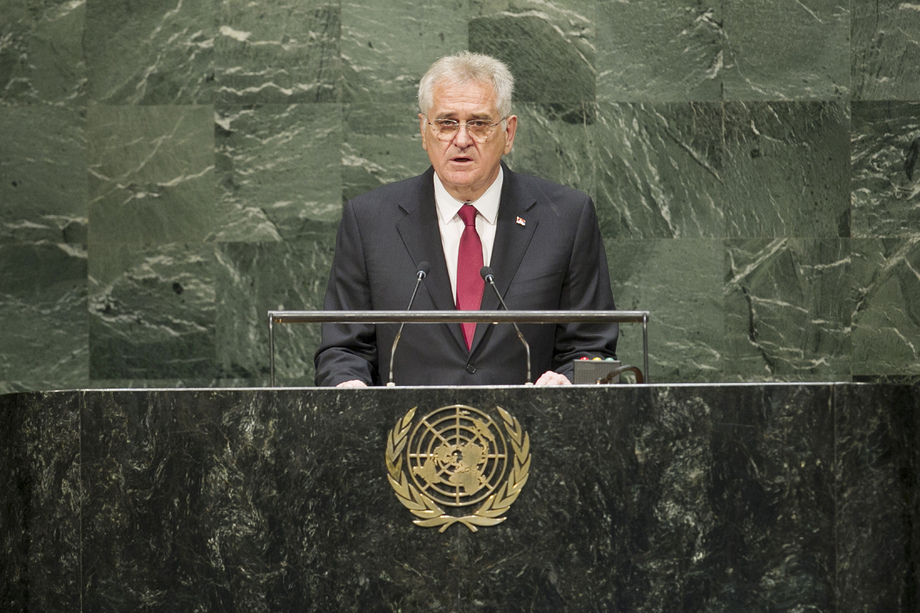 TOMISLAV NIKOLIć, President of Serbia, said that climate change was one of today’s most urgent global challenges.  The effects of natural disasters had strained the fragile economic situation in Serbia, along with the rest of South-Eastern Europe, and made the struggle against poverty ever more difficult.  Initiatives aimed at alleviating the effects of climate change were imperative, particularly those targeting underdeveloped nations.  With the Climate Change Conference in Paris approaching, there was a unique opportunity this year to devise policies that would lay the groundwork for substantive global action.  An important mechanism in the implementation of that process was the Green Climate Fund, which, by 2020, would achieve its ambitious fund-raising goal.

In terms of national priorities, Serbia was seeking to achieve a political solution to the question of Kosovo and Metohija, he said.  For Serbia, the only acceptable and fair solution to that issue was to reject secessionism and preserve the territorial integrity of all countries.  Through dialogue with representatives of the Provisional Institutions of Self-government in Pristina, Serbia was committed to reaching a political agreement that satisfied all parties.  The normalization of relations between Belgrade and Pristina could be largely attributed to the European integration process.  With its active engagement, the European Union could encourage compliance with the obligations outlined in the Brussels Agreement, and help strengthen mutual trust.  For its part, Serbia had met all of its commitments and was open to continued dialogue with Pristina, at all levels.

A key factor in the normalization of relations between Belgrade and Pristina, he said, was the return of internally displaced persons.  The world must not forget that Serbia was the country with the largest number of internally displaced persons in Europe, an amount totalling 230,000, including 58,000 refugees.  Today, 15 years after the adoption of Security Council resolution 1244 (1999), the conditions for the return of internally displaced persons to Kosovo and Metohija had not yet been created.  The plight of refugees deserved special attention, he said, deploring the serious problems facing those vulnerable persons.  Any decisions made by the United Nations on the issue must not undermine the reconciliation process, or the fundamental right of Serbs to return to their homes in Kosovo and Metohija, Croatia and Bosnia and Herzegovina.

Serbia’s top foreign policy priority was membership in the European Union, he said, as that would help modernization and economic development in his country.  In turn, Serbia endeavoured to be a respectable member of the family of European nations.  It was preparing to preside over the Organization for Security and Cooperation in Europe (OSCE) next year, a role through which it aimed to strengthen mutual cooperation and encourage reconciliation in the Balkans.