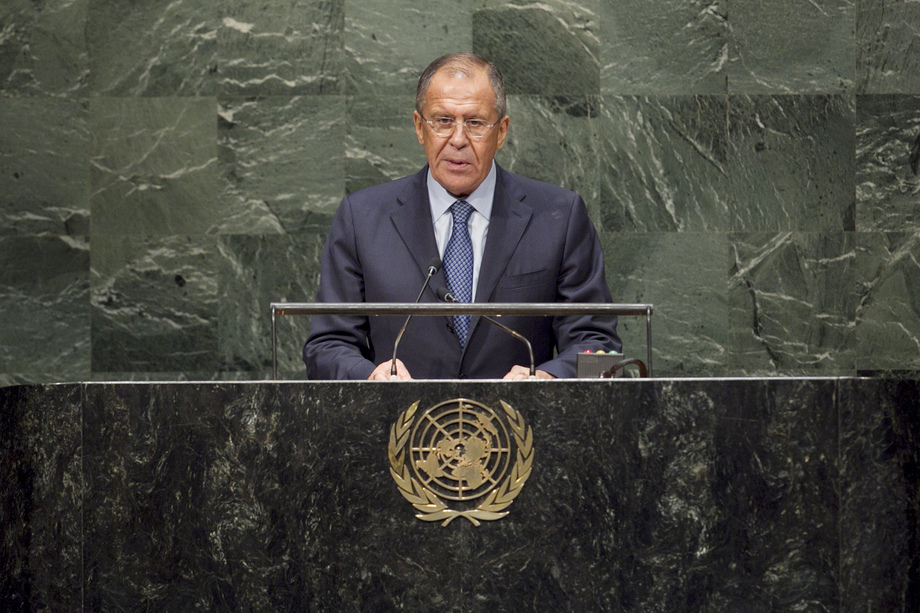 SERGEY V. LAVROV, Minister of Foreign Affairs of the Russian Federation, said that the United States-led Western alliance that portrayed itself as a champion of democracy in fact acted from the direct opposite position and rejected the democratic principle of sovereign equality of States.  That alliance was trying to decide for everyone what was good and what was evil.  The United States Administration had openly declared what it believed to be its right to unilateral use of force anywhere to uphold its own interests.  Military interference had become the norm.

The sustainability of the international system had been severely shaken by the North Atlantic Treaty Organization’s (NATO) bombardment of the then-Federal Republic of Yugoslavia, intervention in Iraq, attacks against Libya and the failure of operations in Afghanistan, he said.  It was only due to diplomatic efforts that the aggression against Syria was prevented in 2013.  There was an impression that the goal of various "colour revolutions" and other projects to change unsuitable regimes was to provoke chaos and instability.  Today, Ukraine had fallen victim to such an arrogant policy.  The situation there had revealed the remaining deep-rooted systemic flaws of the existing architecture in the Euro-Atlantic area.  The West had embarked upon the course towards "vertical structuring of humanity", tailored to its own "hardly inoffensive" standards.

The United States and the European Union supported the coup d'état in Ukraine and reverted to outright justification of any acts by the self-proclaimed Kyiv authorities, he said.  Those authorities had opted for suppression by force of the Ukrainian people, who had rejected attempts to impose an unconstitutional way of life on the entire country, and who wanted to defend their rights to their native language and culture.  It was precisely the aggressive assault on those rights that propelled the population of Crimea to take destiny into its own hands and make a choice in favour of self-determination.  Attempts to distort the truth and to hide the facts behind "blanket accusations" had been undertaken at all stages of the Ukrainian crisis.  The Russian Federation was sincerely interested in restoring peace in "the neighbouring country".  The ceasefire agreement signed by Presidents Petro Poroshenkoand Vladimir Putin had created an opening to resolve the situation.

As a condition for establishing diplomatic relations with the then-Soviet Union in 1933, the United States Government had demanded that Moscow guarantee non-interference in the United States’ domestic affairs and not take any actions aimed at changing the United States’ political or social order, he said.  At that time, Washington, D.C., feared a "revolutionary virus", and the guarantees it sought were put on record, on the basis of reciprocity.  Perhaps, it now made sense to return to that topic and reproduce that demand of the United States Government on a universal scale.  The policy of ultimatums and the philosophy of supremacy and domination did not meet the requirements of the twenty-first  century, and ran counter to the objective process of development of a polycentric, democratic world order.

After commenting on various conflicts throughout the world, he noted that the United Nations had been established on the ruins of the Second World War, and was entering the year of its seventieth anniversary.  Everyone in the international community was obligated to celebrate in an appropriate manner and pay tribute to all who had died for freedom and the right of people to determine their own destiny.