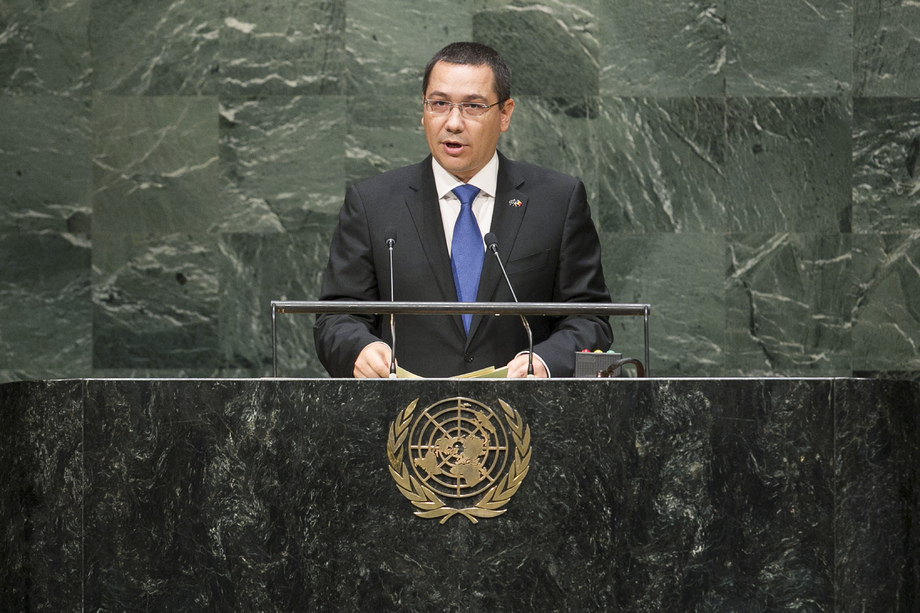 VICTOR-VIOREL PONTA,Prime Minister of Romania, said the current situation in Ukraine was of the utmost concern for his country due to its security impacts on Eastern European countries.  The unilateral annexation of Crimea by the Russian Federation, an unprecedented action on the European continent in decades, had been followed by an internal conflict in eastern Ukraine, which was generated by forces pursuing separatist goals, financed and supplied by the Russian Federation.  His Government rejected any form of external pressure towards Eastern European States aspiring for a European integration, and it supported Ukraine’s territorial integrity and sovereignty.

Located at the crossroads of the Danube and Black Sea regions, as well as that of Northern Europe and the Balkans, Romania, he said, fully understood that regional cooperation was a key to stability there.  Joint initiatives on the economy, environment, infrastructure and cross-border cooperation, including through the European Union Strategy for the Danube River and the European Union Black Sea Synergy, had a long-term impact on all countries in the region.  He praised the solidarity expressed by the Union and its transatlantic partners in supporting the European aspirations sought by the Republic of Moldova, Ukraine and Georgia.

The proliferation of radical Islamist movements and the emergence of new groups, such as ISIL, had heightened the terrorist threat, he said.  The group went beyond Iraq and Syria, and therefore represented a major challenge to the global order; it must be addressed by all States.  On development, the future agenda should address poverty eradication and sustainable development, good governance and the rule of law, and it should provide a platform for social inclusion and reduced unemployment.

On refugees, he said that the emergency transit center in Timisoara, Romania, established by his Government, the Office of the United Nations High Commissioner for Refugees, and the International Organization for Migration, was the first of its kind in the world and had proved to be a feasible mechanism, offering safety to persons in urgent need of international protection.  It, thus, was a practical expression of the human security concept.