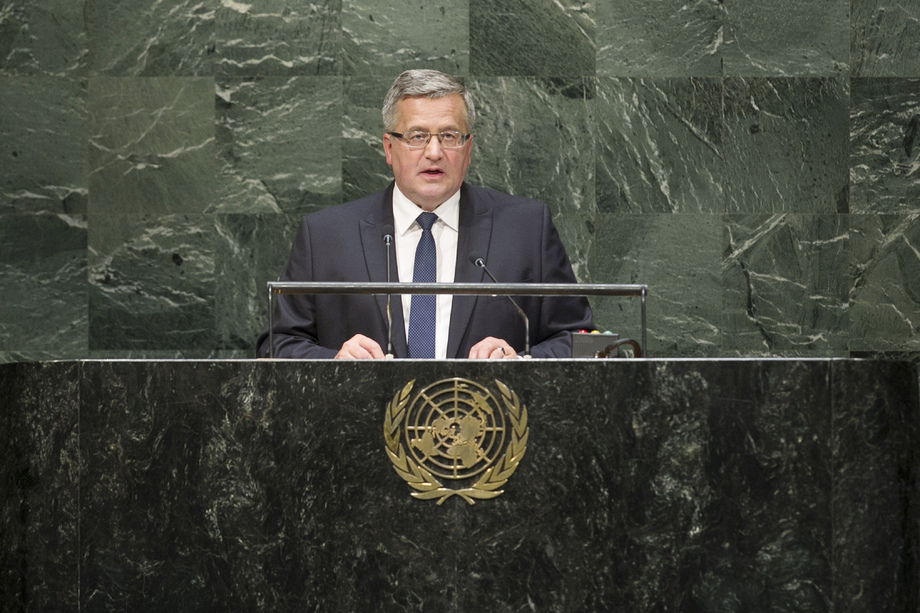 BRONISŁAW KOMOROWSKI, President of Poland, pointed to the toll endured by his country from the two World Wars, out of which the United Nations was born.  He described the failure of the League of Nations to respond to totalitarian expansionism, appeasing dictators at the expense of weaker States.  The Second World War was the price paid for those acts of negligence.  International security had been rebuilt after that war and the world was now looking forward to the United Nations seventieth anniversary.  The Organization had many “beautiful achievements”, but also numerous failures.  The current situation was particularly worrisome because it displayed many symptoms of the phenomena that had caused the fall of the League.  Super-Powers were back in vogue, as were geopolitical zones of influence.  The United Nations should not tolerate any departure from the Charter-based security and international relations principles.

The occupation of Crimea and aggression in Ukraine was a violation of international law standards and “ran roughshod over the United Nations fundamental values”, he said.  The conflict’s ideological backdrop was a return to the rhetoric of the first half of the twentieth century, and imperial domination of weaker nations that were obliged to act as obedient satellites to a Power “performing a revision of the foundations of the civilized order”.  The Security Council was ineffective in protecting peace in Ukraine and elsewhere, partly due to its rules.  Those needed amending, he said, welcoming at the same time General Assembly resolution 68/262 of March 2014, which had taken the side of the weaker party in an act of imperial aggression.

It particularly concerned him to be describing that situation, given that it was the twenty-fifth anniversary of the abolition of communism and the collapse of the Soviet bloc.  Those changes meant freedom, respect for human rights, good governance and an end to the world’s bipolar division.  The changes had begun in Poland with establishment of the Solidarity Movement.  The new logic of international relations had brought unification and integration to Europe, and the European Union had become a “guarantor of peace in Europe and far beyond its borders”.  The end of divisions gave rise to hope for democracy, peace and prosperity, “free from external domination”.  He hoped for a democratic modernization of Russia, too.  However, what had happened in East Europe six months ago “dealt a blow to that hope and threatened security on our continent”.

Wars and conflicts were continuing elsewhere, too, he said, with the Islamic State in Iraq and the Levant’s brutal murders and terror.  The international community must respond in line with its obligation to protect those threatened by cruel violence.  Conflicts in Syria, Libya, Israel, Gaza and in African States were also painful, he said, urging the super-Powers at the United Nations to influence the parties towards resolution of the issues.  He paid tribute to the Organization and its agencies in aiding refugees and said many humanitarian dramas were caused by a breakdown of fundamental human rights.  Power without control was generally “corrupt, self-loving, incapable of lifting countries out of underdevelopment and poverty”.  That, he asserted, was the background to many conflicts.  More development assistance was needed to help transformations.

He stressed the role of democracy, citing the Community of Democracies established in Warsaw in 2000 and the Lech Wałęsa Solidarity Award as examples of his country’s commitment.  The rule of law and universal fundamental rights were vital to development and should be included in the post-2015 agenda.  The new development blueprint should integrate all elements of sustainable development and achieve international agreement.  Climate change must also be tackled, and he remained committed to achieving the successful conclusion of negotiations on a climate change convention.  Noting the extra responsibility his country was taking in several fields, he looked forward to non-permanent Security Council membership in 2018-2019.  He would support the body’s reform to increase its representation and efficiency, and enable it to fulfil its responsibility to protect.