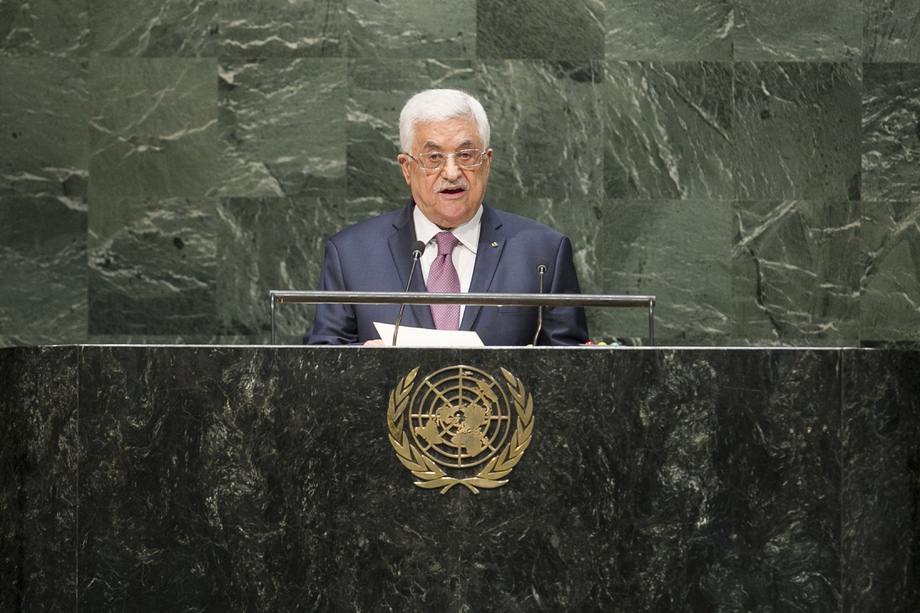 MAHMOUD ABBAS, President of the State of Palestine, said that 2014 marked the International Year of Solidarity with the Palestinian People, but Israel had chosen to make it “a year of a new war of genocide perpetrated against the Palestinian people”.  While the Assembly conveyed the world’s yearning and determination to realize a just peace that achieved freedom and independence for his people in their State of Palestine alongside Israel, the occupying Power had chosen to defy the world by launching a war on Gaza.  He recalled that he had urged the world in 2012 to prevent a new Nakba by supporting the establishment of a free and independent State of Palestine.  “Here we are again today,” he said.

This war on Gaza was the third in five years, he said, noting that the difference today was the scale of genocidal crime was larger, and the list of martyrs, especially children, was longer.  Another difference was that about half a million people had been displaced, and the number of homes, schools, hospitals, public buildings, mosques, factories and even cemeteries destroyed was unprecedented.  It represented a series of war crimes.  It was inconceivable that anyone could claim that they did not realize the magnitude and horror of those crimes.  “We will not forgive, and we will not allow war criminals to escape punishment,” he declared, stressing his people’s legitimate right to defend themselves against the Israeli war machine and to resist the colonial, racist occupation.

Citing negotiations under the auspices of the United States, and in particular, the efforts of President Barack Obama and Secretary of State John Kerry, he said that his Administration exercised “unimaginable self-restraint, silencing our cries and tending to our own wounds in order to give American efforts the best possible chance for success”.  Where do we go from here, he asked.  The idea that it was possible to return to past patterns of work, which repeatedly failed, was naive, and in any case, wrong.  That ignored the fact that it was no longer acceptable nor possible to repeat methods that had proved futile, or to continue with approaches that had repeatedly failed and required comprehensive review and radical correction.

At the invitation of Egypt and Norway, an international conference for the relief and reconstruction of the Gaza Strip would soon take place, he said.  His Government would present comprehensive reports to the gathering.  Over the past two weeks, Palestine and the Arab Group undertook intensive contacts with various regional groups in the United Nations to prepare for the introduction of a draft resolution to be adopted by the Security Council on the Israeli-Palestinian conflict, pushing forward efforts to achieve peace.  That endeavour aspired to correct the deficiency of previous efforts to achieve peace by affirming the goal of ending the Israeli occupation and achieving a two-State solution, of the State of Palestine, with East Jerusalem as its capital, over the entire territory occupied in 1967, alongside the State of Israel.