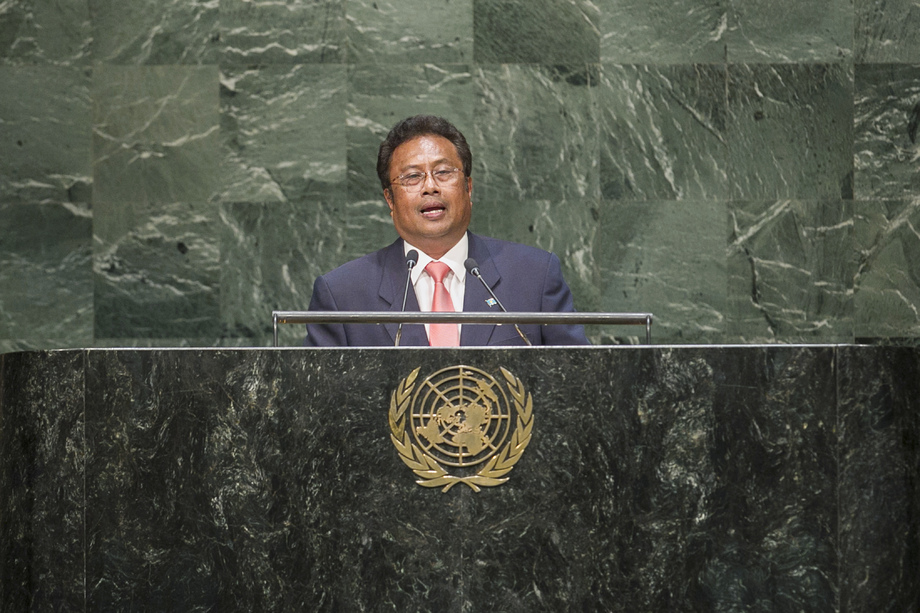 TOMMY ESANG REMENGESAU, JR., President of Palau, said that his country, the Pacific region and the world had reached a crossroads.  In the International Year of Small Island Developing States, communities, societies, cultures and economies around the world were under attack as never before experienced on many fronts.  “We can continue business as usual,” he said, “or we can choose a different road, one that will enable our critical habitats a chance to recover and […] ensure their continued ability to sustain us.”  The Pacific region, whose people comprehended first-hand the real and present impacts of climate change, would not go down without a fight, he declared.

He recalled agreement by leaders at the Pacific Islands Forum that they must play a central role in the stewardship of the Pacific Ocean.  Among the efforts under way were the establishment of protected marine areas and work to launch negotiations by September 2015 for an international agreement under the Convention on the Law of the Sea for the conservation and sustainable use of marine biological diversity of areas beyond national jurisdiction.  He called on the United Nations to ensure a stand-alone sustainable development goal on oceans, and in that context, he warned against making the new goals too broad.  Targets must be realistic, simple, transparent and measurable, and focus on countries whose people were most in need.  Indeed, the time had come to complete the job on the Millennium Development Goals, improving the level and responsiveness of financing mechanisms and ensuring that they reached those who needed it.

Climate change was the planet’s silent war, he went on, adding that a temperature increase of 3.6˚C was simply unacceptable.  If that is the best that global leaders could do, “we might as well throw in the towel and stop having children, because there will be no future for them”, he said.  By the end of 2015, world leaders must announce new, realistic commitments and practical actions supported by enhanced financial commitment to both mitigation and adaptation, and ratification of the second amendment to the Kyoto Protocol.  Migration should not feature as an option in discussions, he said.  Quoting a speaker from the Marshall Islands at the Climate Change Summit, he said, “no one is moving, no one is losing their homeland, no one is becoming a climate refugee”.

Palau had committed to a 20 per cent contribution of renewable energy to the energy mix and a 30 per cent reduction in energy consumption by 2020.  Stressing the importance of global partnerships in the fight against climate change, he expressed gratitude to those who had assisted Palau.  In closing, he said:  “Without effective partnerships, change will simply not occur.  And without legally binding commitments towards our oceans and towards climate change, we will not make the transformative changes that we need to make in the next generation.”