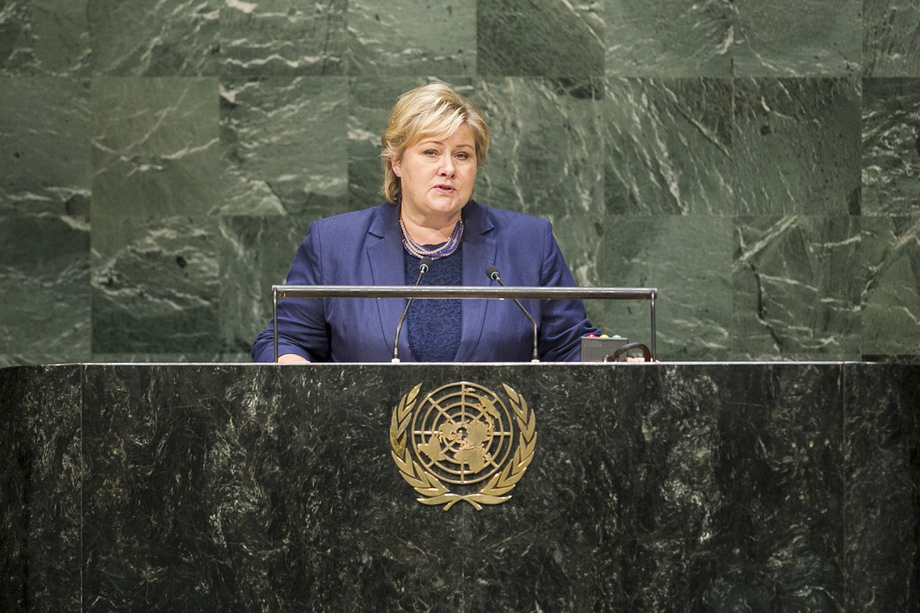 ERNA SOLBERG, Prime Minister of Norway, said that leaders who gathered for the Climate Summit had taken important steps to mobilize action.  Now it was time to make sure that the positive results were followed through and expanded as the international community prepared for an agreement in Paris next year.  Achieving the eight Millennium Development Goals would create a solid foundation for sustainable development.  As the co-chair of Secretary-General Ban Ki-moon’s Millennium Development Goals advocacy group, she would use every opportunity to help build that foundation over the remaining 462 days until the deadline.

The Ebola epidemic in West Africa was a reminder of the fragility of progress and development, she said, urging the building of health-care systems to support courageous and determined individuals, such as the deputy nurse matron Josephine Findu Sellu, who lost 15 nurses to Ebola but who never stopped working in that “death trap”.  Education, particularly for girls, was a “superhighway” to ending poverty, which, together with discrimination and the use of force, often prevented girls from being schooled.  Specifically, sexual violence, abductions and deadly attacks were the most despicable violations.  She condemned the abductions of schoolgirls by Boko Haram in the strongest possible terms, and drew attention to Malala Yousafzai, saying if one schoolgirl could take on the Taliban, then surely the world community could defeat extremism and terrorism.  A girl child growing up in Syria today could not look forward to going to school, because there was no school to go to; and a pregnant teen in South Sudan would not get the maternal health services she needed because travel for health workers was risky.

On other matters of concern to Norway, she condemned the Russian Federation’s violation of international law and its continuing destabilization of eastern Ukraine.  Any settlement of the conflict must uphold international law and respect Ukraine’s territorial integrity.  The ceasefire needed to be respected, for which the Russian Federation bore particular responsibility.  While the Security Council was mandated to maintain peace and security, it had failed to effectively address the situations in Syria and Ukraine, because some big Powers still believed in outdated ideas of zero-sum games and spheres of influence.

International peace, national security, social development and individual prosperity could best be fostered under a system of democratic governance and human rights, she said.  The promotion and protection of human rights was first and foremost the responsibility of States.  However, the international community faced large implementation gaps.  Attacks, threats, intimidation and reprisals against human rights defenders were increasingly being reported.  Discrimination was widespread, particularly against minorities, such as indigenous people and lesbians, gay, bisexual and transgender persons.  As the world set its future course beyond 2015, peace and stability must be included, climate issues must be addressed, and democratic governance achieved for the development of all.