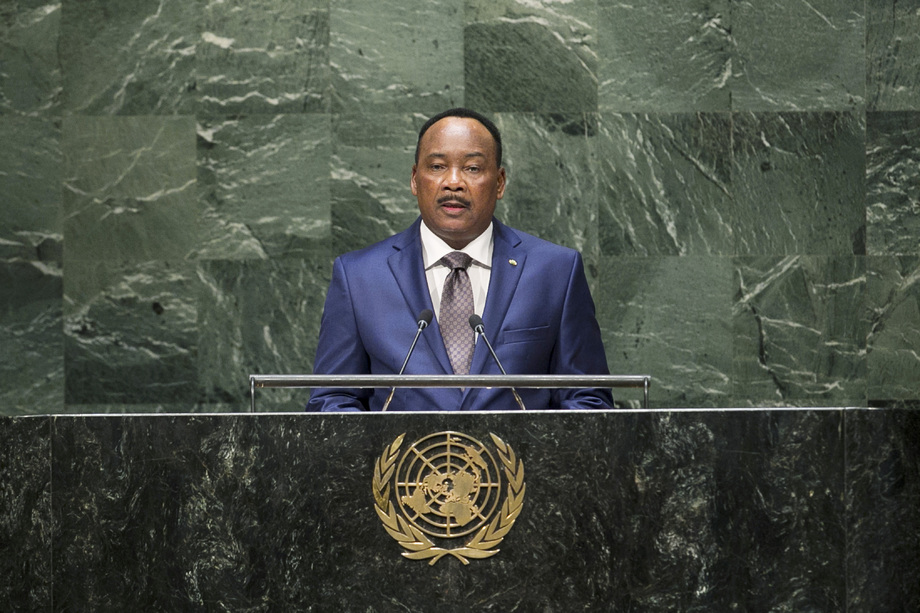 Mahamadou Issoufou, President of Niger, said that sociopolitical crises, religious extremism, armed conflict, terrorism, trans-boundary crime, problems of development, climate change and pandemics, such as those caused by the Ebola virus, were concerns of extreme importance today. In order to meet the challenges of promoting peace, stability, security and development, there must be greater global solidarity and sharing. Despite the tremendous progress towards achieving the Millennium Development Goals, such as that of his country, for example, in reducing the number of people suffering from hunger and mortality rates of children under the age of five, vast gaps remained and would remain after the 2015 target date.

The post-2015 agenda would be dominated by the three Ds: defence, democracy and development, he said. Pointing to increasing poverty as well as conflicts around the world, he said the international community must establish a shared goal and strategy to reduce and eradicate those ills. That must include defending democratic institutions, protecting the people and cutting off financing for terrorism. Resolving the Palestinian question was also important. There must be bolstered action to promote national reconciliation in Libya. He called for increased regional and international cooperation to address the extreme aggression of the Boko Haram militant movement in Nigeria. On Mali, he welcomed inter-Malian dialogue and hoped it would lead to an agreement that would respect the country’s integrity. In Mali and the Central African Republic, a “Pandora’s box of Balkanization” must be closed to prevent Africa from going up in flames, he said, stressing that “the future of Africa is in its unity”.

The fight against inequality must be made a priority and placed at the centre of the post-2015 development agenda, he said. With its high economic growth rate, Africa was the continent of the twentieth century. Indeed, it would be the continent of the twenty-first century when it converted its own raw materials into manufactured goods and took its place in global industrial production, when its relations with other nations were governed by fair trade, not by Official Development Assistance (ODA), and when a broad middle class would arise thanks to good political and economic governance. The vision contained in the African Union’s 2063 agenda indicated that Africa was on the right path. It was in the international community’s interest to mainstream the continent’s priorities.

The international community must also address the challenge of climate change, he said. The drop in rainfall in the Sahel region; the growing spread of desert and sand, as had been seen along the Niger River; the drying up of Chad Lake and the prevalence of floods and drought; among other environmental concerns; had contributed to the impoverishment of people and caused youth to embrace terrorism and organized crime. In consideration of those challenges, he expressed hope that humanity would create and implement a development model that would save the planet and build a fairer, more humane world.