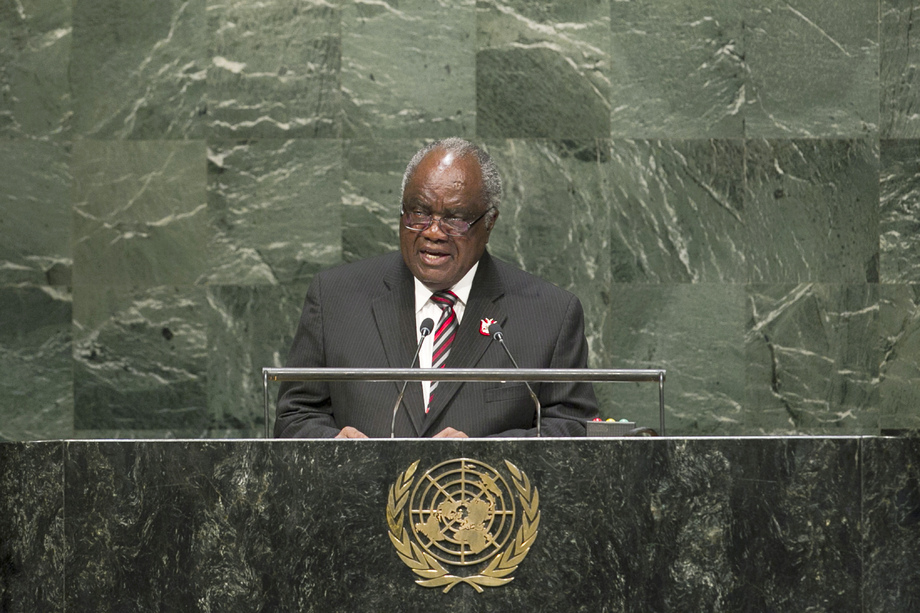 HIFIKEPUNYE POHAMBA, President of Namibia, pointed to numerous crises confronting the international community, including several African countries facing an outbreak of Ebola; the 200 girls abducted in Nigeria; and Gaza having received “indiscriminate” bombardment, which had ended only 45 days ago.  Terrorist groups were disrupting peace and stability in different parts of the world.  But these challenges were not insurmountable.  The enduring values and principles of the United Nations Charter should guide the international community, as should the theme of the sixty-ninth session, “Delivering on and Implementing a Transformative Post-2015 Development Agenda”.

Reflecting on the Millennium Development Goals, their targets and implementation, he said that in his country, the percentage of people living in extreme poverty had been more than halved.  Communities that had previously been cut off from health care had now been reached, including those affected by HIV/AIDS; infection rates had stabilized and increasing numbers of affected people were receiving antiretroviral medication.  Namibia was moving closer to eliminating malaria as a public health threat, and access to clean drinking water and sanitation had also expanded.  In meeting the basic needs of human beings while protecting the natural environment on which people depended, the root causes of poverty and political conflicts in countries should be addressed holistically.

His Government had called for the implementation of the Plan of Action on climate change, and the Namibia Declaration, which had been adopted in Windhoek at the 2013 Conference of Parties to the United Nations Convention to Combat Desertification, he said.  Commending the Secretary-General for hosting the Climate Change Summit, he said that its outcome should complement the negotiations within the United Nations Framework Convention on Climate Change (UNFCCC) with the ultimate aim of reaching a coordinated global agreement in 2015.

He also voiced concern about the “political instability” and armed conflict in South Sudan, Mali, and the Central African Republic.  On the situation in the Democratic Republic of the Congo, a range of measures needed to be implemented in order to consolidate peace.  Namibia supported women’s participation in peacekeeping and peacebuilding operations around the world, and had deployed one of the largest female police contingents to the African Union — the United Nations Hybrid Operation in Darfur (UNAMID).  The embargo on Cuba should be lifted, and the country should not be listed as a State sponsor of international terrorism.  All relevant United Nations resolutions on Western Sahara and Palestine should be fully implemented.