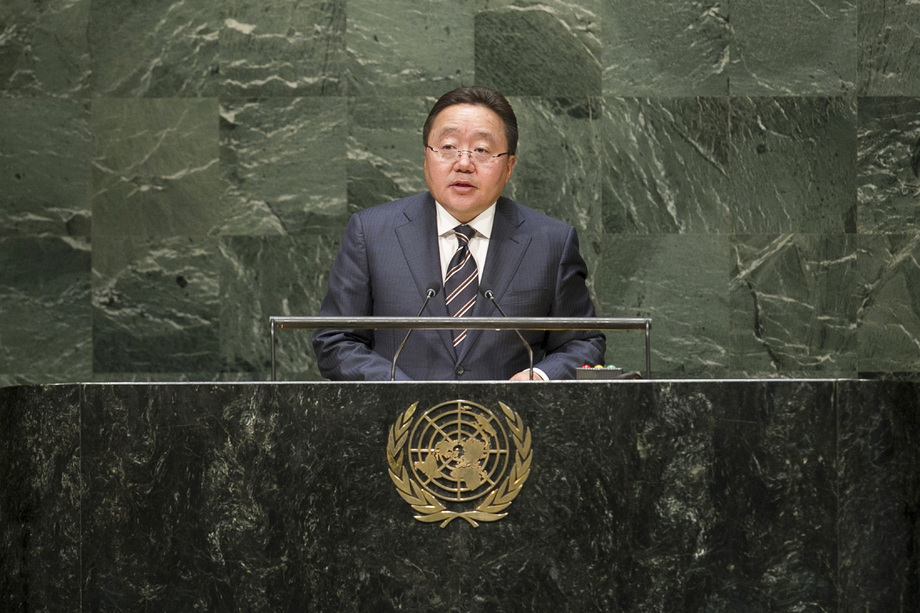 ELBEGDORJ TSAKHIA, President of Mongolia, said that ISIL posed an alarming threat to regional peace and security, and he called for action to resolve that issue in compliance with the United Nations Charter.  He also stressed that the situation in Ukraine should be resolved through political dialogue only, and not the use of force.

He noted Mongolia was currently chairing the Freedom Online Coalition, and expressed the country’s support for the decision of the United Nations Human Rights Council that Internet freedom was a basic human right.  As a staunch advocate of democracy and freedom, Mongolia would use the opportunity of chairing the Coalition to promote, both nationally and internationally, free and secure Internet for all.  Touching on other areas of interest to his country, he highlighted climate change as an urgent priority, and in the lead-up to “COP21” in Paris next year, called for bold action and strong political will to ensure that State pledges were translated into action.  He welcomed the outcome of the Open Working Group on Sustainable Development Goals, but said it could have better reflected the special needs of landlocked developing countries, and he looked forward to the upcoming intergovernmental negotiations to redress that situation.

Regarding the recent Mongolia, China and Russian Federation summit, he said that the countries had agreed to expand their cooperation in the areas of transportation, infrastructure, development and reduction of trade barriers.  He also highlighted peace and stability in North-Eastern Asia as one of Mongolia’s national security priorities, expressing his view that the Korean peninsula must be nuclear weapon-free.  On organizational reform, he said that in a time of major geopolitical change, the United Nations system must reflect new economic and political realities.  The reform process, therefore, must be accelerated, including the “long-overdue” expansion of the Security Council’s permanent and non-permanent membership.  On that note, Mongolia had put forward its candidature for a non-permanent seat for the 2022 elections, and was seeking the support of fellow members.