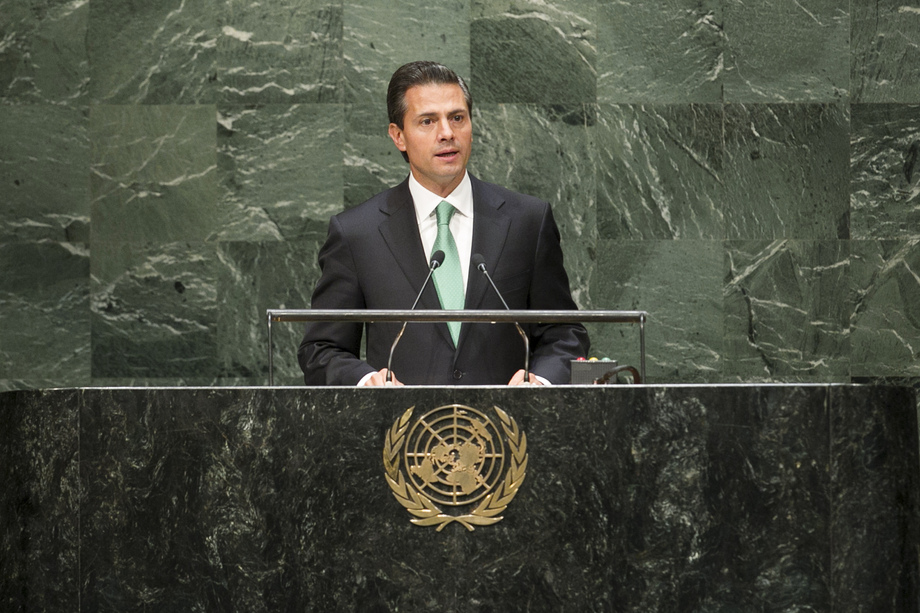 ENRIQUE PEÑA NIETO, President of Mexico, praised the United Nations for leading international efforts on a range of dangers facing humanity, from hunger and pandemics to climate change. With all those new, border-transcending challenges, the world needed change at the United Nations, he said, calling for a more “effective, efficient, transparent and representative” Organization. Security Council reform was of utmost importance, and Mexico believed it should be enlarged by increasing the number of non-permanent members, thus creating “long-term seats with the possibility of immediate re-election based on a more equitable geographic representation. The permanent members should refrain from using their veto power in cases of grave violations of international humanitarian law, he said.

Arms trafficking inflicted serious damage to the world’s societies, he said, adding that for the Arms Trade Treaty to address that, it was imperative not only to sign the text, but to ratify it. Next year, Mexico would host the first Conference of State Parties. He then turned to the situation of young people and children, saying it was time to launch a “joint global action” against all forms of bullying. Touching on the situation in his own country, he said that Mexico had managed to reach agreement among all political forces on the need for reforms, which had allowed improvements to education, modernization of the telecommunications sector, and a renewal of the judicial and accountability systems. He attributed the country’s ability to achieve those changes to dialogue and consensus.

As Mexico had dared to transform itself, so could the United Nations, he said, noting that the Organization, at nearly 70 years-old, needed to evolve in keeping with the rest of the world. The talent and wisdom needed for that transformation were present — what was now needed was for Member States to listen, discuss, tolerate and yield. Mexico supported United Nations peacekeeping and had decided to participate in the missions in order to provide humanitarian assistance to civilian populations. The United Nations seventieth anniversary next year was an opportunity to drive change, he concluded, reiterating his country’s commitment to the Organization.