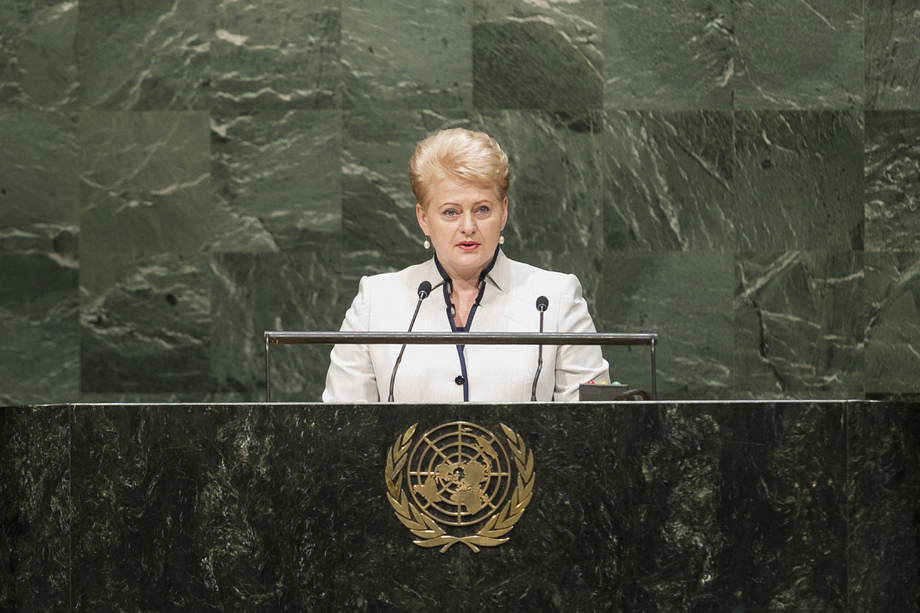 DALIA GRYBAUSKAITĖ, President of Lithuania, said the nature of global security had changed dramatically, with non-State actors, religious fundamentalists and rebellious criminal gangs terrorizing the world and threatening the safety of peaceful people.  Sadly, some States were supporting terrorists and had become hubs and shelters for growing violence.

Peaceful and sustainable coexistence between countries and societies required collective efforts, determination and national commitment, she said.  As a group of nations, the international community must maintain undivided security and exert all its efforts to stop ISIS and Al-Qaida, and restore peace and security in the Middle East.  The same efforts should be directed to address the geopolitical challenges in Eastern Europe, and it was the international community’s duty to support peace, sovereignty and the territorial integrity of Ukraine.

Most importantly, she said, the international community must never abandon the values that held it together:  respect for human rights and the fundamental principles of State sovereignty and territorial unity.  Its ongoing commitment to protecting these core values was evident in voting results, at the United Nations, concerning the armed conflict in Ukraine, when 100 States had supported the Nation and condemned the Russian Federation’s occupation of Crimea.  A silent consent to such aggression should not be the response of the international community.