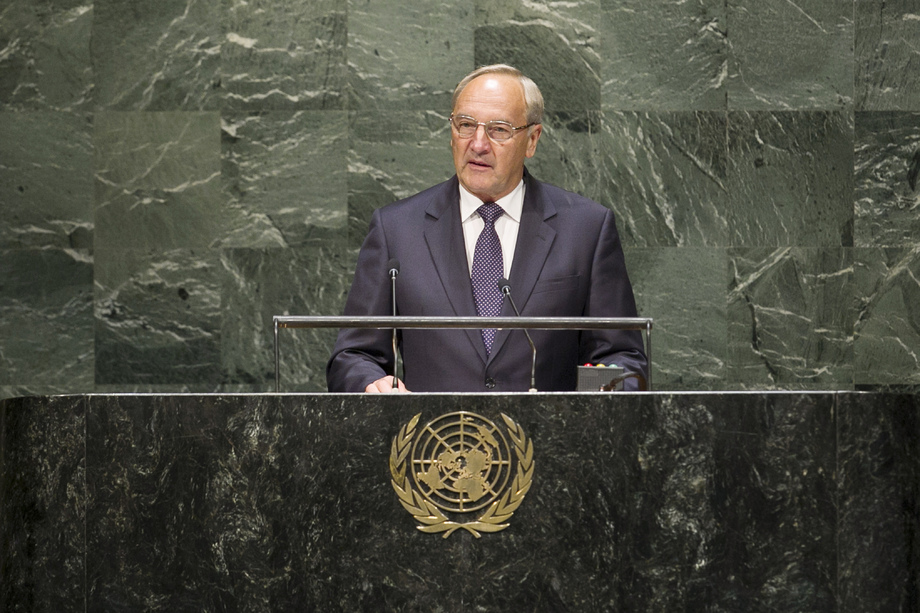 ANDRIS BĒRZIŅŠ, President of Latvia, said that global security and peace was being challenged by forces willing to “rewrite the history and rules of the international order”.  The Russian aggression against Ukraine had defied the basic principles of the United Nations, uprooting the foundation of the international system.  Those actions could only be defined as a threat to global peace and security and, as such, the illegal annexation of Crimea by that country should not be recognized and must be condemned.  The Russian Federation had a vital role to play in security and stability in Europe and thus should be “part of the solution, not part of the problem”, he said, calling on that country to respect its international commitments and uphold international law.  A resolution was also needed to the protracted conflicts in Transnistria, Abkhazia, South Ossetia and Nagorno-Karabahkh, he said.

On the Syrian situation, he said that while the easing of human suffering should be the immediate priority, the international community must continue political efforts to find a solution to that conflict.  Those responsible for war crimes against humanity in Syria must be held accountable by the International Criminal Court.  The limited ability of the Security Council to address the urgent situations in Ukraine and Syria had highlighted the need to move forward with Council reform.  Towards that end, Latvia supported the Council’s expansion in both categories of membership.  It also believed the French initiative aimed at restricting the use of the veto warranted attention.

In other matters of international security, he welcomed the ongoing dialogue between the E3+3 countries and Iran, which aimed to negotiate a comprehensive agreement on the country’s nuclear programme.  “We must work towards revitalizing the global disarmament and non-proliferation agenda,” he said.  With that in mind, the Nuclear Non-Proliferation Treaty Review Conference next year depended on trust and common purpose.  Latvia was one of the first States to have signed and ratified the Arms Trade Treaty, and it urged all Member States to do the same.

Without peaceful societies, it was not possible to achieve sustainable development, he said, adding that each country had a responsibility in that regard.  The post-2015 agenda must be consistent with all human rights and be underpinned by the rule of law.  It should address inequalities and discrimination, including through information and communication technologies, as those could be key enablers of development.  Gender equality was essential in shaping respectful and equal relationships in society, and those values were important to Latvia.  As an aspiring member of the Human Rights Council for 2015‑2017, his country would continue to promote those important values globally.