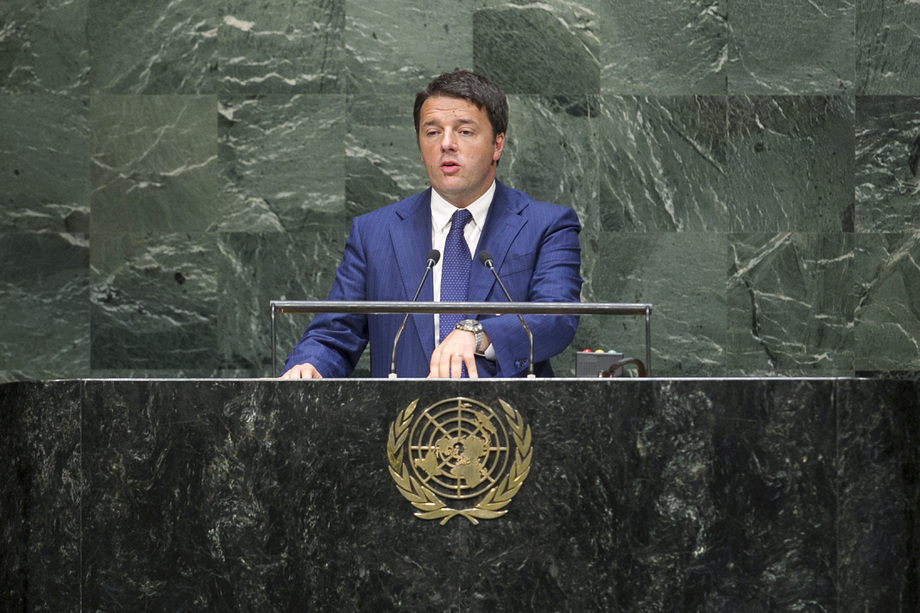 MATTEO RENZI, Prime Minister of Italy, said he was honoured to address in the same Hall in which former United Nations Secretary-General Dag Hammarskjöld had spoken.  Citing present challenges, he said the future was no longer a dream, nor could the past be erased.  With that, he highlighted the Srebrenica massacre from 20 years ago.  The killings had found no justification, and he advocated for political effort as the way to prevent bloodshed.  Italy, due to its central location, had assumed a political role in the Mediterranean region, with strategic interventions, conducted with partners, saving 80,000 human lives.

The situation in Libya, he said, was now a matter of concern, and the risk of it spiralling into violence should not be underestimated, as that could threaten the entire North African region.  Italy was committed to working with the United Nations Secretary-General to address the situation.  In the battle against the ISIL terrorist group in Iraq, the international community could not remain idle.  The fanatics had killed many, with children shot against the wall and young women raped in warehouses.  "Genocide is under way," he warned, and only a united international effort could defeat it.  That was why Italy supported the call by United States President Barack Obama for a broader coalition.

His country contributed troops to United Nations activities in Lebanon and Afghanistan and supported a two-State solution in the Israel-Palestinian conflict, he said, adding that the rights of Palestinians must be respected and Israel's right to exist must not be questioned.  The situation in Ukraine jeopardized the process of European integration, and Italy supported the right of people there and the nation's territorial integrity, which had been violated.  He urged the parties to seize the opportunity provided by the Minsk ceasefire.

The Ebola outbreak had humanitarian and social impacts, he said, adding that his country was doing its part.  He also called for gender equality and non-discrimination based on religion, and advocated for a moratorium on capital punishment; a resolution to be tabled to that end would need broader support.  The Security Council should become more effective, but creation of more Council seats could compromise its effectiveness.  Finally, he warned, there would be no peace, no freedom and no respect without a huge investment in education.