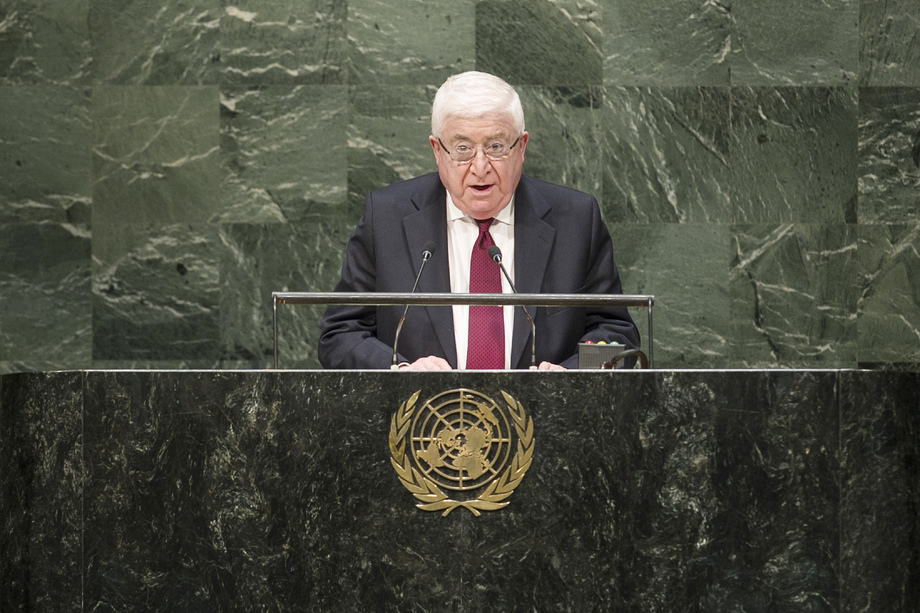 MOHAMMED FUAD MASUM, President of Iraq, calling ISIS a real danger, said that group's attacks on innocent civilians had taken terror to a new era and level, establishing a State based on hatred.  With its huge financial and military assets, it had committed crimes against humanity, inflicted suffering on Iraqi people and had become a hotbed, attracting militants and extremists from around the world, including America and Europe.  His Government had successfully liberated some cities that had been occupied by the terrorist organization, owing to the huge humanitarian and military support received from the United Nations, United States, the European Union and other friendly States and for which he was grateful.  Such support confirmed that his country was not fighting terror alone.

Drawing attention to millions of defenceless civilians who had been forced to live under the tyranny of ISIS, he called upon the international community to provide protection, relief and support for his country's efforts.  The Iraqi people were determined to cleanse their land of the armed group, he said, stressing that eliminating terror in their country would be an important step in ridding the world of danger.  He called for the institutionalization of "that responsible position" against terrorism and for such an institution to be tasked with developing and operationalizing solidarity to fight terrorism.

Pained to see the suffering of their fraternal Palestinian people in Gaza and other Palestinian territories, he also called upon the international community to honour its commitment to the Palestinian people and exert efforts to restore peace.  As well, he said he wished those in Yemen and Libya success on their path to democracy and voiced hope that the Syrian people would be able to overcome this crisis, unite to end bloodshed and preserve life and democracy.  Continued tension would always support extremism and tyrannical ideology.  As such, the international community could not allow an exacerbation of that conflict.

Turning to the results of the Working Group on Sustainable Development Goals, he said the question of terrorism in all its forms and manifestations did not occupy the space it deserved in the report.  It could have addressed the challenge as its own objective, looking to its causes and ways to address it.  Recalling that people around the world were still promoting partnership and enhancing prospects for peace and security, he said there was no other option but to defeat ISIS everywhere, as well as other elements that continued to threaten the international community.