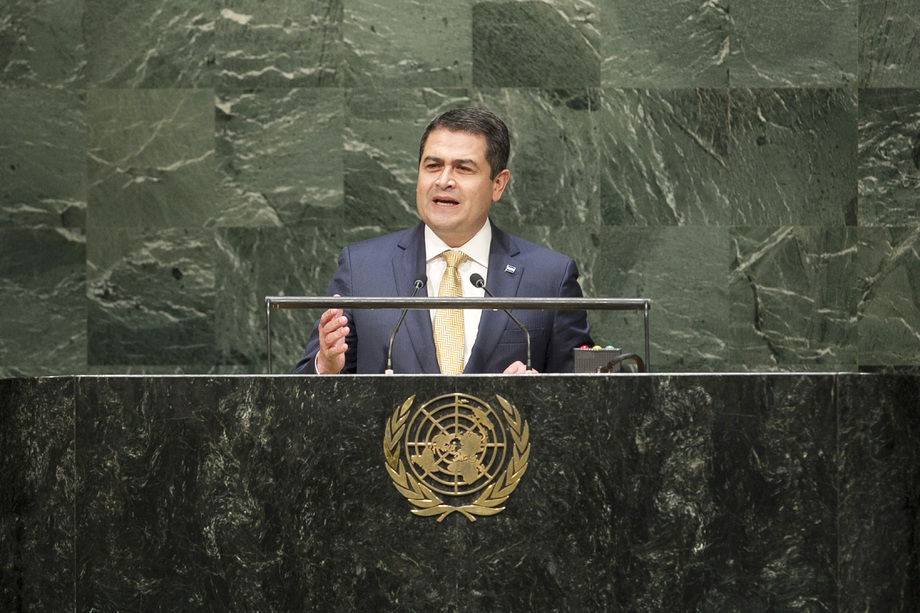 JUAN ORLANDO HERNÁNDEZ ALVARADO, President of Honduras, said the nation’s “Everyone for a Better Life” plan was based on four pillars:  recovering peace; creating investment opportunities for very poor families; combating corruption; and promoting transparency.  Since taking office eight months ago, he had worked to instil peace and create more just conditions for all.  More investment in the country was needed to create better-paying jobs.  Honduras had reformed its Constitution to create employment and economic development zones known as “ZEDE”, with special legal, economic, administrative and political jurisdictions.  The zones could improve competitiveness and well-being.  They were governed by a common law system with international arbitration and judges, and offered a technical, non-political structure for companies and guaranteed transparency and political stability for investors.

He said the Government was setting up a logistical inter-oceanic corridor to move cargo between the Atlantic and Pacific oceans in less than six hours, and hoped to capture at least 5 per cent of cargo traffic demand.  He, meanwhile, called for special attention to the growing number of unaccompanied children migrating to the United States due to violence, drug trafficking and their parents’ lack of economic opportunities at home.  Staunching those flows was a shared responsibility, he said, declaring that Honduras was merely a transit territory for a war created by drug-consuming countries in the North and drug-producing countries in the South.  The time had come to finally attack the root causes of the drug problem.  “We must create a multinational force capable of successfully confronting this transnational phenomenon,” he said.

There was much talk of families displaced by war, violence and extreme radicalism in other regions, but little mention of the situation faced by thousands of families in the northern part of Central America, he said.  “What is the difference between people displaced by violence in other regions and those displaced by violence generated by drug traffickers and transnational crime?”, he asked.  The region could not continue to ignore that human drama affecting thousands of Central Americans, particularly child migrants who were victims of violence, rape, and human and organ trafficking.

Noting that many children had died in the desert, he said “these children deserved to be treated with dignity and respect; they are innocent victims”.  Yesterday, he had handed the Secretary-General the “ Alliance for Prosperity” plan, which provided a blueprint for support and opportunities for Central Americans everywhere.  Generating work opportunities for the parents of child migrants was vital.  Elaborating on the “Everyone for a Better Life” programme, he said it was designed to bring potable water, basic sanitation, housing and children’s school fees and health care to 835,000 Honduran households in need.  To address climate change, energy-efficient stoves had replaced thousands of wood-burning stoves in Honduras.  The latter appliances caused 37,000 deaths in the country annually, he said, adding that each energy-efficient stove saved 15 mid-sized trees each year.