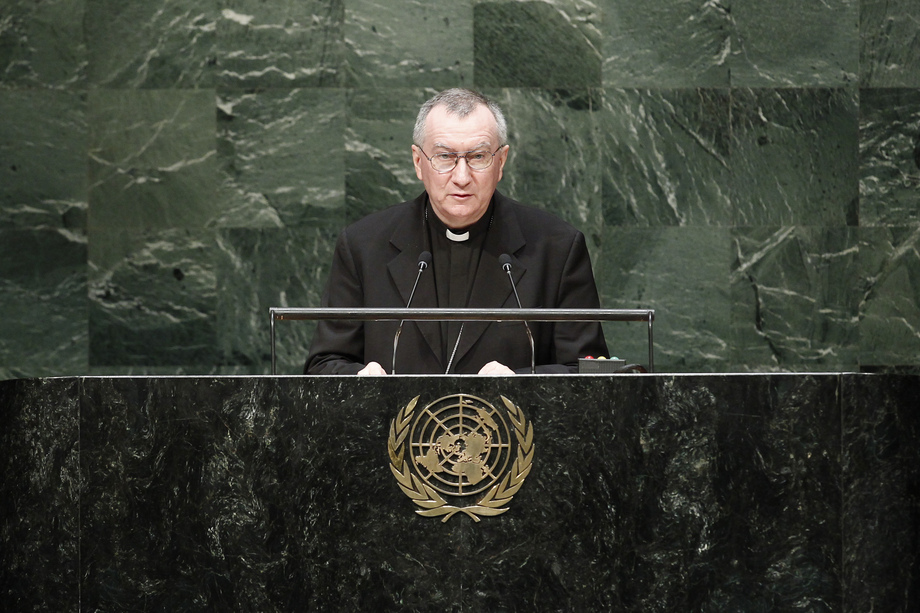 PIETRO PAROLIN, Secretary of State for the Holy See, said that Pope Francis had observed a danger of widespread indifference.  When a union of States remained passive in the face of hostilities suffered by defenceless populations, the General Assembly had to deepen its understanding of the difficult and complex events occurring at present time.  The "dramatic" situation in northern Iraq and some parts of Syria was showing the international community a new phenomenon, that of a terrorist organization threatening all States, vowing to dissolve them and replace them with a pseudo-religious world government.  Such violence was borne out of a disregard for God and falsified religion itself.

To counter young, disillusioned people from around the world being attracted to that new phenomenon, he urged the General Assembly to focus on addressing the cultural and political origins of contemporary challenges, and also to further study the effectiveness of successfully implemented international law.  The challenges posed by the new forms of terrorism should not make the international community succumb to "exaggerated views and cultural extrapolations", he noted.  That would only lead to reactions of a xenophobic nature, which would paradoxically reinforce the sentiments at the heart of terrorism itself.  The paths open to the international community were then in promoting dialogue and in a true commitment to peace.

Nonetheless, the threat of terrorism could not be faced with cultural openness alone, he said, stressing that "the important path of international law is also available to us".  The global nature of the new terrorism was precisely why the framework of international law offered the only viable way of dealing with the urgent challenge it presented.  It was urgent to stop aggression through multilateral action and a proportionate use of force.  However, that the international community had responded to conflicts in Syria, the Middle East and Ukraine with contradictory voices and with silence was disappointing.

He also pointed out that, in regards to development and poverty, the principle of "responsibility to protect" applied to the protection of people against forms of aggression, such as a financial system governed only by speculation and the maximization of profits.  Social and economic justice, he underscored, was an essential condition for peace.