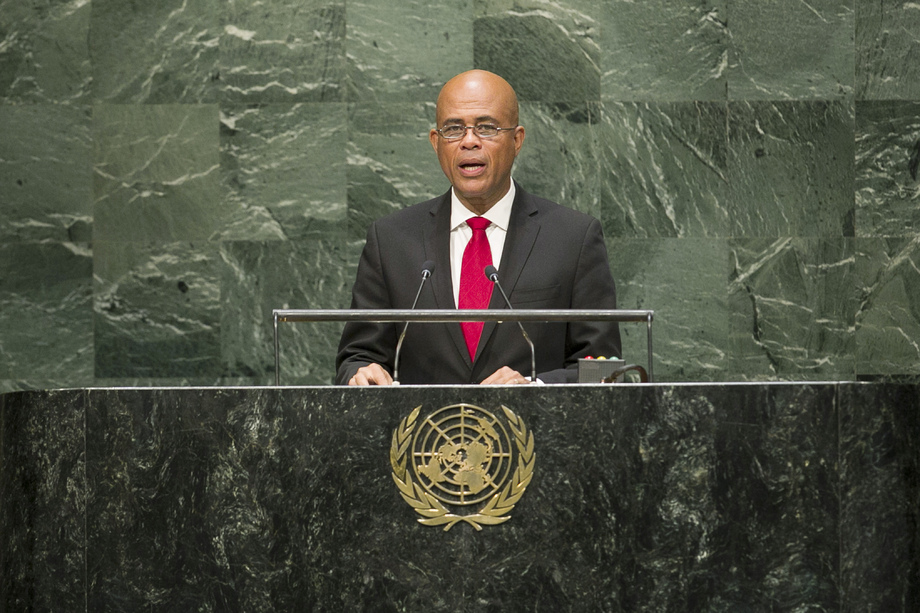 MICHEL JOSEPH MARTELLY, President of Haiti, underscored the productive negotiations with the Dominican Republic towards resolving issues and misunderstandings that were over half a century old.  The voluntary discussions had resulted in agreement on some issues that previously had not been so easy to resolve.  Because negotiation and peaceful resolution of disputes were crucial and the United Nations was vital to the maintenance of peace, enlightened voices had to continue that work, and reform of the Organization was an important aspect of that.  The Security Council was in need of new members, particularly as inclusion was a central part of the Charter.  Its legitimacy and credibility depended on its ability to act efficiently and rapidly while recognizing the value that each individual State added.  That was particularly important in crises like disease outbreaks, and he singled out Cuba for its efforts to unite countries to respond to nations affected by Ebola.

The people of Haiti were at a key moment in their march towards stability and implementation of democratic institutions, he went on to say.  After two decades marked by catastrophes of all types, there had been irrefutable progress in the previous three years on democratic consolidation, institution-building, poverty eradication and human rights protection, during which time sustainable growth and development was simultaneously proceeding.  The road ahead was long, but the obstacles surmountable.  The security situation had improved thanks to many Government efforts to strengthen national peace, and Haiti was now one of the most secure States in the Caribbean.  In light of that, he called for the continued, progressive withdrawal of United Nations troops, with Haiti's police filling many roles previously held by United Nations Stabilization Mission in Haiti (MINUSTAH).

Describing progress made, he said that 5 per cent of GDP had been dedicated to education, with expanded free access to primary education.  Work to achieve the Millennium Development Goals and efforts against AIDS, malaria and sexually transmitted infections were ongoing, with more health centres available.  Infant and maternal mortality had been reduced, and many buildings vital to the health infrastructure had been built or rehabilitated.  He urged a decisive commitment from the United Nations on cholera, calling for contributions to the national plan to eradicate the disease.  Important economic reforms were being instituted to improve the business environment, while the increased flows of capital and tourists to Haiti illustrated the improving economic climate.

Free elections would be held as soon as possible, he said, noting his own role in guaranteeing the stability of institutions.  He had spared no effort in finding consensus between organizations and institutions involved in arranging elections.  Awaiting the summit on Sustainable Development Goals in 2015, he expressed his administration’s confidence in the goals.  Resources were available and the challenge was finding a just and equitable way to share them.  His country would contribute and the United Nations had to be strengthened to better complete the mission.  That could form the basis of a mission to improve security and solidarity and to secure peace worldwide.