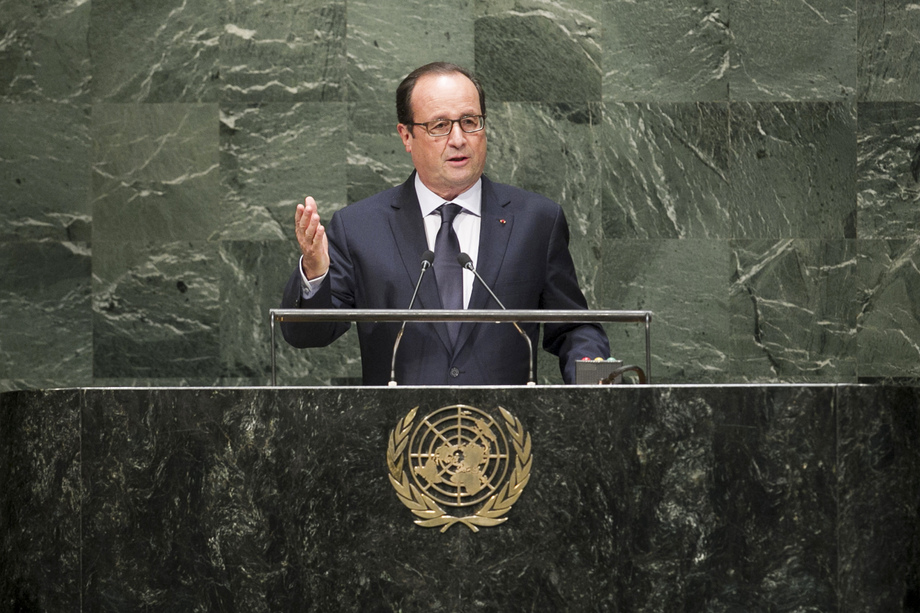 FRANÇOIS HOLLANDE, President of France, said he was addressing the General Assembly with a high level of emotion, following the assassination of his compatriot, Hervé Gourdel, by a group linked to ISIL in Algeria today. He condemned the execution, and urged the international community to fight against terrorism under the flag of values of human dignity and freedom. France was fully committed to this fight. Today, ISIL was not just a threat to the region, but to the entire world. The group was provoking attacks, organizing abductions, and recruiting and training fighters from all over the world to reproduce the threat of terrorism. In response, France was bringing in aerial support to weaken ISIL’s power.

He said there could be no sustainable solution without resolving the Syrian crisis. To that end, France supported the democratic Syrian opposition as the only legitimate representation of the Syrian people. Today, France had experienced a tragedy, but it had a role to play and it would not renounce it. The fight against terrorism would be pursued and accelerated with respect for the rule of law, State sovereignty, and United Nations values.

Turning to Ebola, he sympathized with affected African friends, and warned that they could not expect to contain the epidemic in affected countries without help. France and the world had a responsibility to provide those countries with the necessary care, protection and economic assistance. Without solidarity, all other countries would be affected, he added.

He also stressed that the world must address climate change, which was not only threatening to the current generation but also to the next one. Climate change was a threat to security because more people were displaced by that phenomenon than by wars. France had taken responsibility by deciding to organize a climate conference in 2015. All must do everything possible in Paris to ensure that a binding global agreement was reached.

He reiterated that it was a sad moment today in France, but it was also a time to take responsibility, reduce inequalities, combat terrorism and fight climate change. He was certain that those challenges could be dealt with, if the world was united. “Together we can achieve this victory,” he concluded.