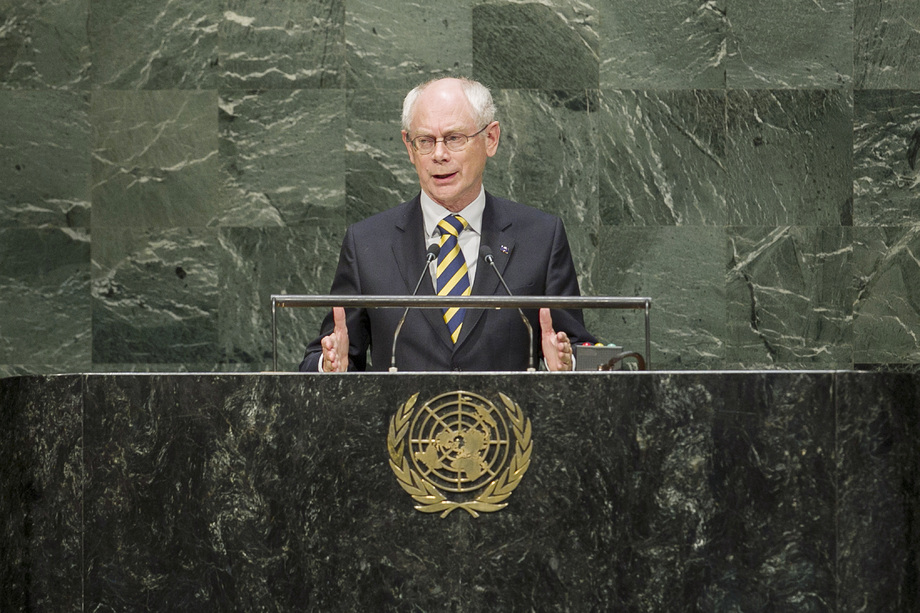 HERMAN VAN ROMPUY, President of the European Council, said that the abrupt and illegal annexation of Crimea in March had triggered the gravest threat to European security in decades.  The European Union stood firm in its solidarity with Ukraine and had responded to the aggression and violation of international law with political, economic and financial sanctions.  However, the sanctions were not a goal in themselves and could be revised, provided there was tangible progress.  The peace process launched in Minsk must be advanced, and all parties must respect the ceasefire and abide by the Peace Plan.  The Europeans were ready to engage with the Russian Federation and reestablish a basis of trust, he added.

Highlighting situations in Iraq, Syria and the wider Middle East as the most pressing concern today, he welcomed the words and measures by the Arab League, the Organization of Islamic Cooperation, and Muslim nations against ISIL.  He urged the international community to do its part in confronting and isolating it by blocking financial and weapons flows, cutting off illegal oil revenue, and stopping the influx of foreign fighters.  Urgent collective action was needed to stop those combatants from joining ISIL's ranks, as underlined in yesterday's special Security Council session.

The crisis, however, could not be resolved without a political solution for Syria, which he called one of the international community's "biggest failures".  There should be a comprehensive regional resolution, which must include a two-State solution.  The violent dynamics were spreading instability and fostering terrorism, organized crime, arms flows, drugs trafficking, human smuggling and radicalization.  Another tragic symptom of an imploding Middle East was dramatic migration in the Mediterranean, with millions fleeing the war in Syria into countries that included Jordan, Lebanon and Turkey.  European lifeguards, he noted, had rescued up to a thousand people a week — people risking their lives on small boats in search of a life free from fear.

Reaffirming Europe's commitment to fighting climate change, he expressed his hope for all nations, large and small, rich and poor, to assume their responsibility.  He called Ebola a plague of modern times, and the crisis caused by the outbreak a reminder that the future of a country and well-being of all depended on health-care structures.  Europe was there with others to help, to comfort, and to heal.  In closing, he said that fear must be overcome by fighting danger, restoring justice, and striving for peace so that next year when world leaders met again in New York, they could say that the spell of that dreadful summer of 2014 had been broken.  “Patiently but relentlessly we reconquer a place for hope," he concluded.