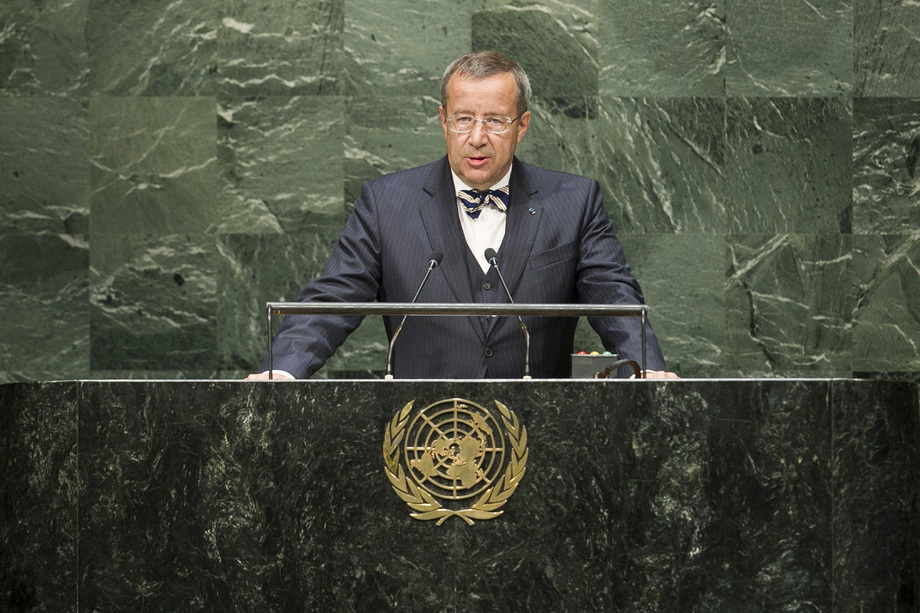 TOOMAS HENDRIK ILVES, President of Estonia, reminded the Assembly that it had collectively agreed, in the Charter, and other international agreements, to respect territorial integrity and to recognize the freedom of States to choose their own security arrangements.  By annexing Crimea and invading eastern Ukraine, one of the signatories had violated those agreements.  If changing State borders by force would become the accepted norm, the whole world would be threatened.  Such developments must be firmly condemned.

The paralysis of the Security Council, while international justice was being manipulated and multiple crises were escalating, demonstrated that it must be reformed, he said.  Its work methods must be revised, with special attention to openness, accountability and transparency.  No permanent member of the Council should abuse the veto to circumvent the principles of the Charter.

Pointing out the universality and inviolability of human rights, he said there could be no guarantee of peace, justice, stability or security unless the basic rights of all human beings were respected and protected in every country.  Emphasizing the need for free speech, including online, he said that the internet was a driver of economic growth and a key development tool.  Most of the next billion Internet users would be from developing countries.  The post-2015 development agenda should recognize the importance of new technologies and e-services as a contribution to the security and prosperity of the world.  However, cyber security was essential both to protecting rights and to economic prosperity.

Addressing a series of related challenges, he noted that Ebola had become an international public health emergency, that climate change was becoming an existential threat to some countries and that those and the risks of violence, insecurity, financial and economic collapse, lack of resources and natural disasters were intertwined and needed to be addressed in an integrated way.  Peace and sustainable development required respect for human rights, which presumed the rule of law at the national and international level.  In that regard, he said that Estonia had developed an e-governance system that it had been sharing with all interested parties.

He recalled that long discredited ideas from 1938, of co-ethnics abroad being used as justification to annex territory, had returned.  “We cannot allow anyone ever again to divide countries into their “spheres of influence”. “The community of nations is only secure when its smallest members can feel secure.  […]  A way must be found to re-enforce and revalidate the agreements that we all have signed,” he stated