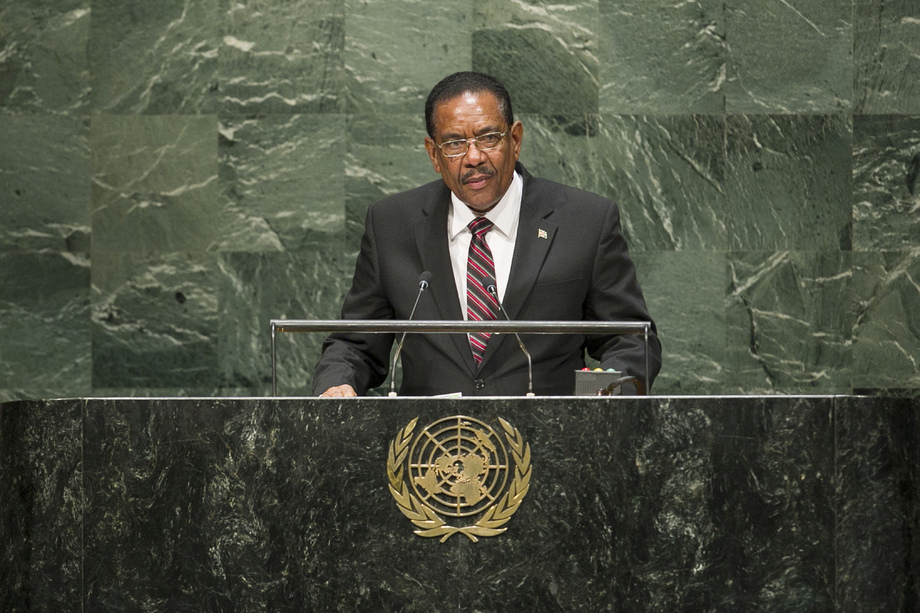 CHARLES ANGELO SAVARIN, President of Dominica, said that 20 years after the adoption of the Barbados Programme of Action and 10 years after the approval of the Mauritius Strategy for Implementation, most of the commitments made to help promote sustainable development in small island developing States had not yet been delivered.  Hopefully, the outcome of the recently concluded third United Nations Conference on Small Island Developing States would create a new impetus to address those implementation gaps.  That Conference had established the "SIDS DOCK", an initiative to create a global organization for the development of sustainable energy for those States.

Fifteen years after the Millennium Declaration, only a few in the developing world had registered tangible gains, he said, adding that the majority continued to wait for the promised improvements in their living conditions.  However, Dominica had been able to achieve most of the Millennium Development Goals, with notable progress in reducing poverty, improving access to education, ensuring environmental sustainability and building strong bilateral and multilateral partnerships.  Dominica's achievements in education had surpassed the Goals’ targets, and the country could now boast universal access at the early childhood, primary and secondary school levels.  Access to post-secondary education was also available to all secondary school graduates.

He said Dominica had always been guided by the principle of sustainable use of its national resources and protection of its physical environment, which was why it was called "the Nature Island of the Caribbean".  In its efforts to ensure environmental sustainability and rid the island of reliance on fossil fuels, Dominica had invested in renewable energy, and today, about 20 per cent of the island's electricity needs were met from "clean" hydropower.  So far, the country had invested over $20 million in it geothermal resources, and production results indicated that the geothermal reservoir had capacity to generate sufficient electricity for domestic consumption.

Despite achievements, however, the world was a long way from where it aspired to be, he said.  The spectre of the deadly Ebola disease and the scourge of HIV/AIDS and non-communicable diseases had significant potential impacts and threatened the gains made so far by small island developing States.  The myriad existing challenges called for global action to protect those gains.  The impact of climate change remained an existential threat to people throughout the world who called small island developing States their home.  The islands of the Caribbean were also prone to earthquakes, droughts and torrential rains with their accompanying landslides and flash flooding — phenomena made worse by climate change.  Natural disasters severely damaged efforts to bring about social and economic development, he added.

Dominica joined the Caribbean Community (CARICOM) in calling for development partners to conduct their macroeconomic and trade policies in a way that would facilitate opportunities and promote growth for small island developing States, he said.  That new criterion must take into account those States’ inherent vulnerabilities.  In that vein, he added that the economic embargo against Cuba remained of concern.  The unilateral action of the United States could not be justified today.  Similarly, the events in Ukraine were a “proxy tug of war” between the European Union and the United States on the one hand, and the Russian Federation on the other.  The United Kingdom, due to its current situation with regard to Scottish independence, was uniquely placed to counsel the European Union, United States, Kyiv and Moscow, to accord the people of Ukraine the same opportunity to decide their own destiny.