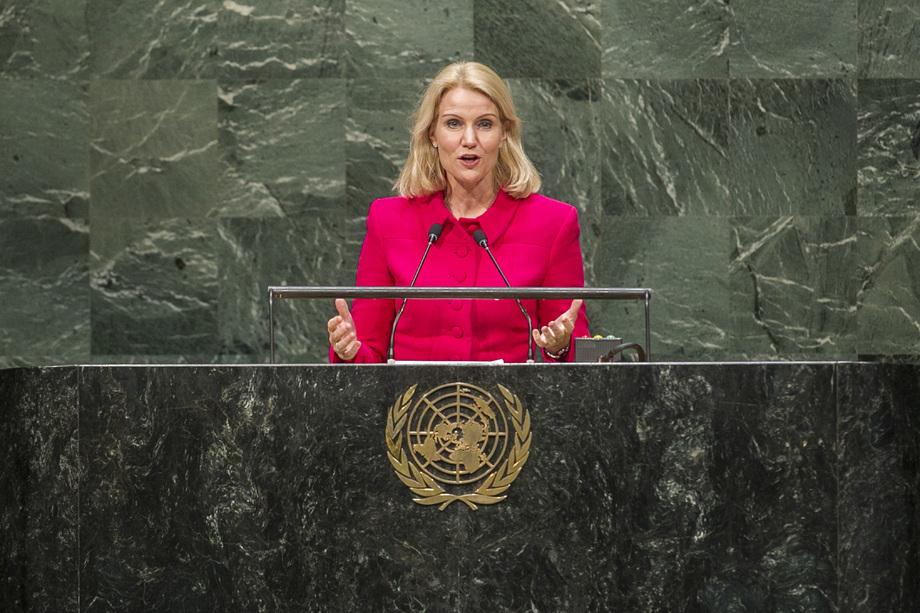 HELLE THORNING-SCHMIDT, Prime Minister of Denmark, condemned the situation unfolding in Syria and Iraq and the heinous acts of ISIL, including the lack of respect for international borders and the persecution of people based on their religious beliefs.  That contravenes the laws and norms upon which our international system and laws are built.  Strong global action was needed to manage today’s conflicts, yet there were no simple solutions, she said. As the world changed, new ways must be found to adapt, for which actions must be united.  The United Nations’ strength rested in a unified international community, and all must fulfil their Charter-based obligations.

She identified three issues that her country had deemed urgent for the United Nations to address:  developing stronger international cooperation on peace and security; reaching a climate change agreement at the upcoming summit in Paris; and reaching global consensus on the post-2015 development agenda.  In the area of international security, confronting ISIL should be a top priority, she said, condemning ISIL’s violence and extremist ideology.  Denmark had supported the Iraqis and the victims of its atrocities, and the international community in the effort to defeat that terror group.  The root causes of the crises must be confronted.  Bringing an end to the violence in the region required a sustained contribution from all, she urged.

The global response to the chemical weapons threat in Syria last year had highlighted the potential of a united international community, she said, adding that a unified response was also required to deal with the Ebola crisis.  Failing to tackle that would not only result in a global health crisis, but would pose a major threat to international peace and security.  There was a collective responsibility to control the outbreak.  For its part, Denmark had contributed significant funds to combat the crisis and would continue to provide material support.  Included in that would be maritime capacity, she announced.

On the subject of climate change, she stressed the importance of reaching a binding agreement at the Paris conference later this year that would reduce CO2 emissions.  She had been to Greenland with the Secretary-General and seen the visible effects of climate change in the Arctic.  However, climate change would not just have regional impact, but would “affect every one of us on this planet”.  This year, Denmark would commit $100 million on that front, however Governments could not act alone.  Partnerships, including those with the private sector, were needed to foster green solutions.  The post-2015 agenda was also of critical importance in the effort could “wipe poverty off the face of the earth”.  That was not based on wishful thinking, but was within our reach, she said.  The new set of development goals must address a broad range of metrics.  Particularly critical to developing countries were women’s empowerment, gender equality and reproductive and other rights of women and girls.