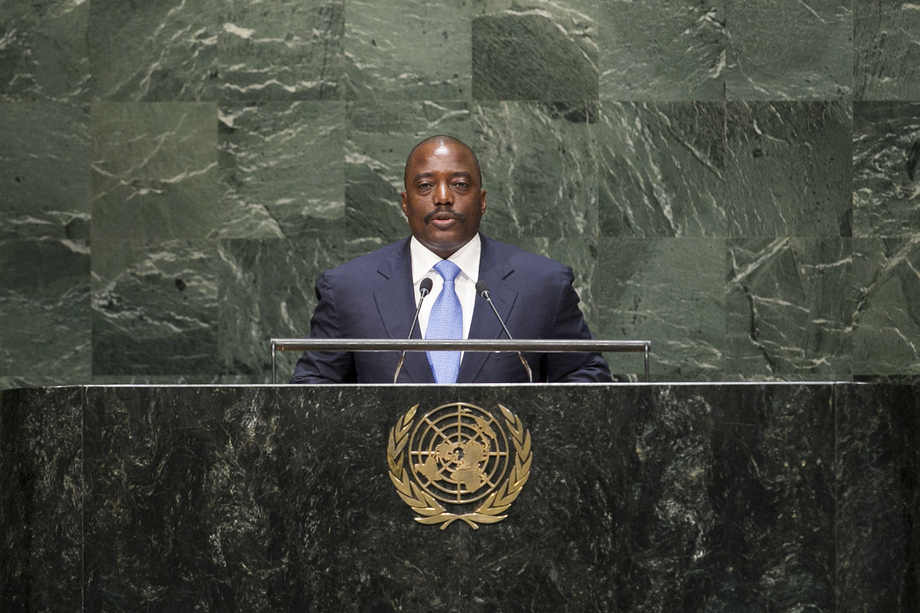 JOSEPH KABILA KABANGE, President, Democratic Republic of the Congo, said terrorism continued to claim the lives of people around the world, and Africa, formerly saved from its blind violence, was today its epicentre.  African nations, including Somalia, Libya, Nigeria and Kenya, among others around the world, were afflicted by that blight, which there was a moral obligation to eliminate.  African countries also saw their paths to development blocked by the recent Ebola outbreak, which had claimed the lives of more than 2,000 people, including 40 in the Democratic Republic of the Congo.  Africa’s struggle against the disease was heroic, but States there needed support.  The entire human race was threatened by the disease and the international community’s “touching and effective” solidarity with Africa was a “beautiful example of human solidarity”, as compared to the “naked competition” seen in many other areas.  The outbreak was the seventh to strike his country, and he offered the benefits of 30 years of experience of Congolese health professionals to West African countries in need of it.

Wars were engulfing the Middle East, Ukraine, Syria, Libya and the Central African Republic, he said, recalling the aim of the United Nations to handle situations that were causing death and devastation.  He wondered why, so many decades after its establishment, the human race still seemed unable to preserve peace.  He promised Congolese help in preventing wars, noting that a Congolese contingent of peacekeepers was active in the Central African Republic.  Any impediments to implementing the post-2015 development agenda could be handled as long as there was political will and resolve to do so.

He looked back 13 years, when the situation in the Democratic Republic of the Congo was bad, but added that things had improved significantly and the country was now standing tall again.  Peace was strengthening every day and the country had a dynamic economy, marked by low inflation, growth above the African average and constantly increasing reserves.  The country was being rebuilt at an unprecedented rate, with new roads, schools, and hospitals always under construction.  The Government’s priorities were strengthening democracy and national cohesion, and success was apparent.  Elections would be held under the auspices of an independent electoral commission and everything had been done to ensure that the country emerged from the balloting more at peace with itself and stronger.  Efforts would continue to re-establish peace in the country’s East and to improve relations with neighbours, he said, pointing to an improved business climate and stressing the importance of stability to achieving that.

With six of the world’s most dynamic economies in Africa and their rapidly growing populations and vast natural resources, he said it was “not normal” that the continent did not have a permanent seat on the Security Council.  It was high time that situation changed, he said, adding that such reforms were also essential prerequisites for improving that body’s effectiveness.