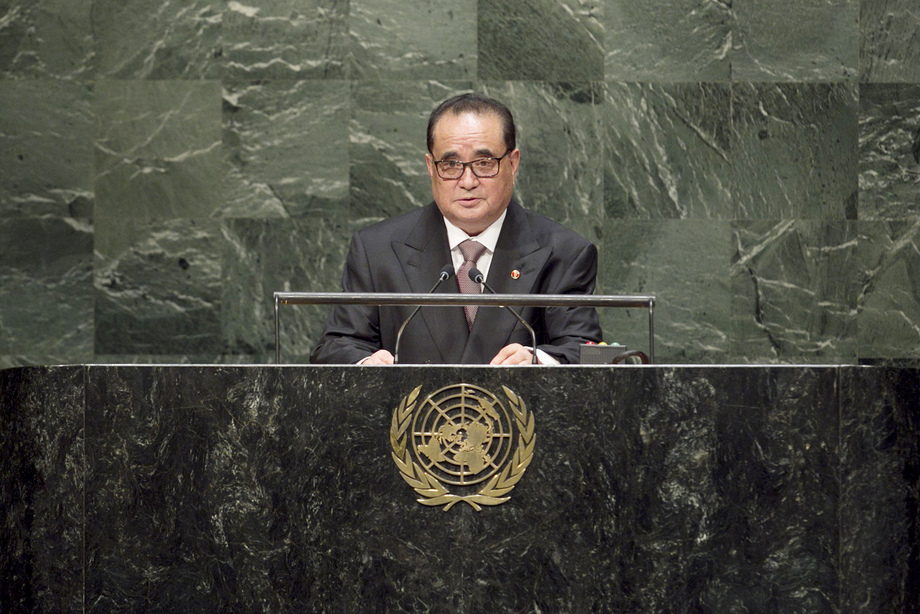 RI SU YONG, Minister for Foreign Affairs of the Democratic People’s Republic of Korea, commended the successes of the Millennium Development Goals, notably the reduction of poverty by half over the first 15 years of the millennium.  His country had overcome severe hardships during that time, among them, an economic blockade, military threat and political obstruction, to safeguard its national dignity, deter war and put a stagnant economy back on track.  Citing national achievements in construction, the fishing industry and livestock farming, among others, he said that the post-2015 development agenda should focus on creating a favourable environment for attaining a common sustainable socioeconomic development for humankind, while consolidating successes of the Millennium Goals.

He went on to say that the United Nations and international relations must be made more democratic and rest on respect for sovereignty and non–interference in the internal affairs of other nations.  The Security Council was still mired in the cold-war paralysis; its anachronistic stereotypes and prejudices could find their most extreme expression in the prevailing situation on the Korean peninsula.  Also evident was the unwillingness to take up the issue of “United States-South Korea” joint military exercises, aimed at taking over Pyongyang, a matter his country had officially referred to the Council.  Why were such exercises, with the participation of more than 500,000 troops, needed on the Korean peninsula nearly a quarter century after the end of the cold war, he asked.  The tense situation on the peninsula was a serious obstacle to his country’s economic development.

In that context, he said the Security Council must stop “showcasing the extreme manifestation of the double standard”, noting, in particular, that the military exercises waged by a permanent member “is covered up with no regard to their serious threat to peace and security, whereas those conducted by a UN Member State in response is called into question”.  The Council should “no longer serve as a forum for telling lies”, he said, recalling the statement made 11 years ago in the Council by a permanent member that “there are weapons of mass destruction in Iraq”.  That, he said, was “a big lie of the century”.  Council reform would revolutionize the Organization and render international relations more democratic.  His country’s decision to become a nuclear-weapon State was due to the “hostile policy, nuclear threat and stifling strategy” of the United States.  The nuclear issue would be resolved “if and when” the threat to his country’s sovereignty and right to life was removed.  National unification should be achieved not through “confrontation of systems”, but by two systems co-existing in one country.