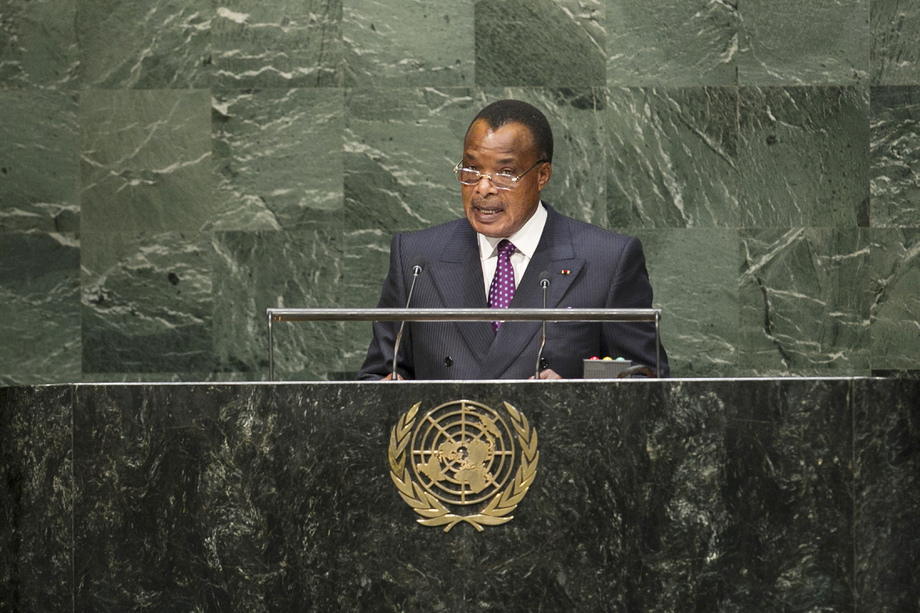 DENIS SASSOU NGUESSO, President of Congo, said the world was in turbulence, with humankind facing numerous tensions and conflicts, terrorism, old and new epidemics, persisting disparities and climate change.  All that made people place their faith in the United Nations, the only instrument the world had to search for solutions to numerous problems.  He called on the States to prioritize action directed towards peace, security and the preservation of nature.  The world needed peace and security in places such as Syria, Ukraine, Iraq, between Israelis and Palestinians, as well as in Africa, especially in Libya, the Sahel-Saharan region, South Sudan, Central Africa and the Great Lakes region.

Africa needed increased support from the international community, he said.  That assistance was needed so that Somalia could escape the abyss, Mali could recover its unity, and the Democratic Republic of the Congo would not plunge again into violence.  The continent also required help to halt maritime piracy, developing dangerously in the Gulf of Guinea, and reduce the spread of terrorism from the Sahel to the south of Africa.  In Central Africa, insecurity was often not only the result of wars and armed violence, but of poverty and diseases such as malaria, HIV/AIDS and Ebola.  He was pleased by the solidarity shown by the international community in helping those African countries affected by the Ebola outbreak.

On climate change, he said that it was a major threat to the planet.  It was important for his country and Africa to establish mechanisms for transferring innovative technologies and finances, to ensure a real implementation of the Green Fund, to have a proactive climate change programme and to optimize existing opportunities in the fight against climate change.  The illegal exploitation and illicit trade of flora and fauna represented another threat to the biodiversity and environment, he added.

On the Millennium Development Goals, he said that the analysis by stakeholders at all levels had shown that they had not attained the objectives, inter alia, because of shortcomings in their initial preparation and formulation.  His continent would have the largest number of countries not attaining the Goals by 2015.  To meet those challenges, African leaders had adopted a joint position on the post-2015 development agenda.  He concluded by re-affirming his country’s commitment to the promotion and protection of human rights by strengthening its legal and institutional framework with the full participation of civil society.