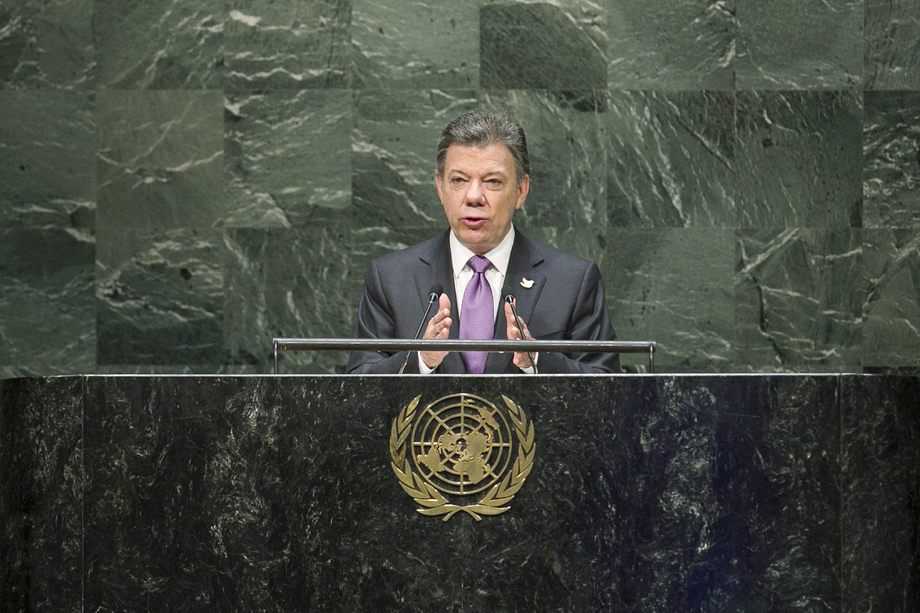 Juan Manuel Santos Calderón, President of Colombia, expressed hope that after more than half a century of conflict Colombia would soon be at peace. Over the past two years, the peace process between the Government and the Fuerzas Armadas Revolucionarias de Colombia (FARC) guerrilla group in Havana had produced concrete results. The two sides had already agreed on three points of a five-point agenda: comprehensive rural development, political participation and the illicit drug problem. On the third point, an agreement was reached to continue dismantling the drug mafia, promote a national programme of crop substitution and alternative crop development and address the problem of overconsumption from a public health perspective.

Discussions on the remaining points — repercussions for victims of the conflict and the end of conflict itself — were already under way, he said, stressing the importance of victims’ rights to justice, truth and reparation. A subcommittee comprising active military and police personnel had been created to set the terms for the final bilateral ceasefire process and subsequent demobilization of guerrillas. Colombia aspired to bring good news that “the last armed conflict in the Western Hemisphere is coming to an end”.

Colombia was not oblivious to the suffering of those who lived in places such as Syria, Iraq, Libya, the Sahel and Ukraine, and condemned the ruthless terrorism of ISIL, he said. Nor was Colombia indifferent to the suffering of so many families in Palestine and Israel, or to the loss of life due to epidemics like Ebola in West Africa. With the seventieth anniversary of the founding of the United Nations approaching, now was “a definitive moment” for the legitimacy of the Organization and its multilateral system. The global community must dissuade those who promoted permanent war.

In his own country and around the world, drug trafficking fuelled conflicts, he said. The so-called “war on drugs” had scored some successes in the Western Hemisphere, he said, drawing attention to the resolution adopted last week at the special session of the Organization of American States’ General Assembly in Guatemala. Those results would inform the special session on drugs that the United Nations had called for in 2016. He was committed to making Colombia a country at total peace with equality and the highest rate of education in Latin America by 2025.