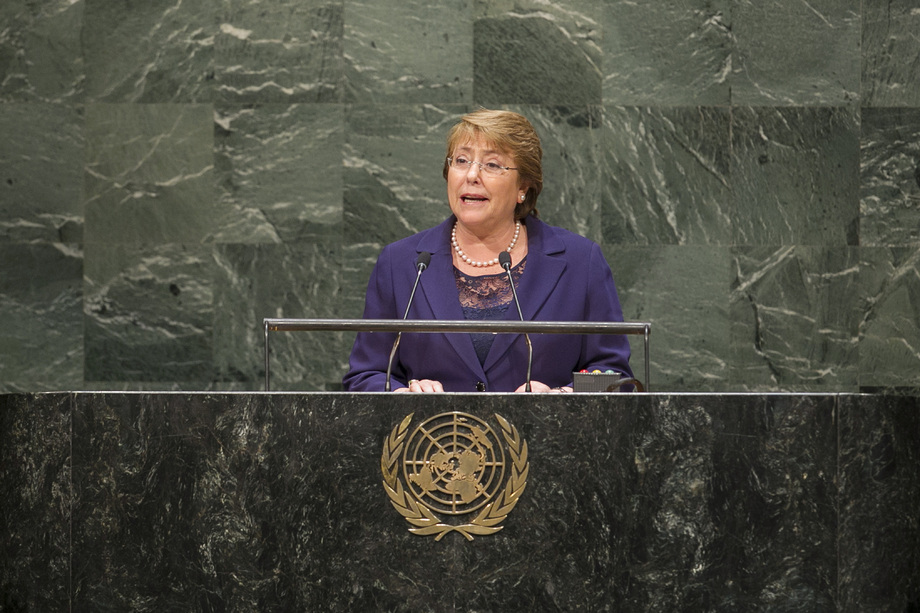 MICHELLE BACHELET JERIA, President of Chile, acknowledged that the Security Council had helped to address and prevent crises through robust peacekeeping operations, but noted that, regrettably, it had not been able to reach an agreement on what action to take on many occasions.  That highlighted the need for reform, which required political decisions.  Calling for a serious debate on limiting the right of veto in the case of crimes involving the responsibility to protect, she supported the Security Council’s enlargement and permanent membership for Germany, Brazil, Japan and India.

She was concerned about the 3 million refugees created by the crisis in Syria, she continued, as well as the activities of terrorist groups such as “ISIS” and the “cruel violence” in Gaza.  Her country was prepared to increase their humanitarian commitments and would consider accepting refugees from those conflict zones.  Turning to Ukraine, she highlighted the need to respect the principle of territorial integrity and, at the same time, protect the rights of minorities.

The post-2015 development agenda was a great opportunity to tackle social and development issues through specific and measurable goals, she said.  In addition, issues concerning women, peace and security were priorities on the Security Council agenda.  Addressing climate change, she said that Chile had only a marginal effect on the problem, since it accounted for only 0.25 per cent of carbon emissions.  However, because it suffered the consequences, it wanted to be part of the solution.

Voicing her country’s aspiration to become a member of the United Nations Economic and Social Council, she also expressed interest in a greater coordination of initiatives and instruments to facilitate South-South cooperation by middle-income countries.  In that regard, the Government had enacted legal provisions to fully open the economy to imports from the 48 least developed countries without duties or quotas.