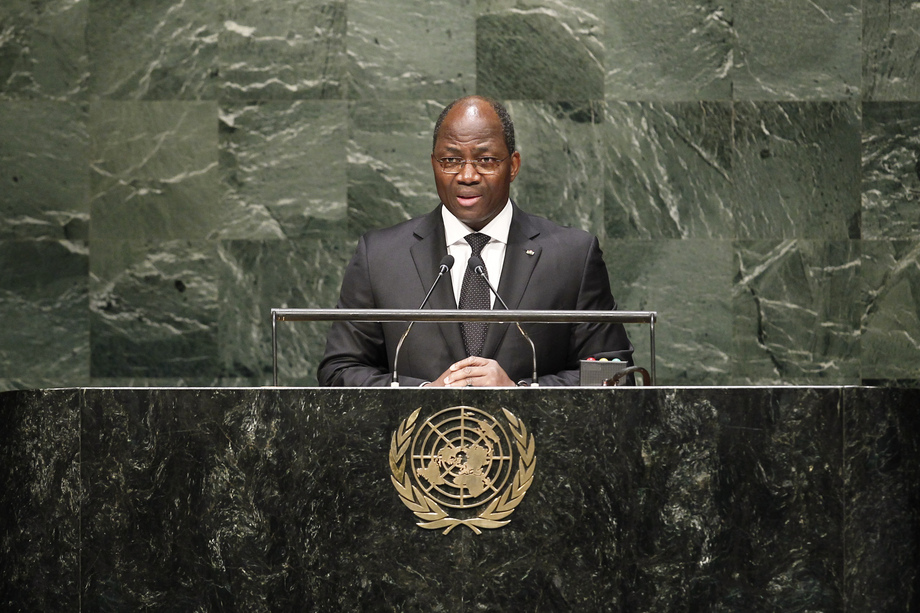 DJIBRILL YPÈNÈ BASSOLÉ, Minister for Foreign Affairs of Burkina Faso, welcomed the appointment of the Special Envoy on Ebola, and said the initiative to combat the disease would allow the West African subregion to strengthen its systems of public health.  Efforts of development could only succeed within a context of stability and peace.  Burkina Faso thus continued to create a culture of tolerance and peaceful coexistence, strengthen the momentum of democracy and respect the rights of individual and collective freedoms.

He welcomed the recent adoption by the Human Rights Council of efforts to eliminate female genital mutilation.  In Mali and elsewhere in the Sahel, armed conflicts were becoming more extreme and more radical.  Those were characterized by trafficking in drugs, weapons and humans, and there was a shared responsibility to eradicate those ills.  Poverty, youth unemployment and the denial of rights and justice were results of that imbalance.  Defence and security forces needed to fight effectively against terrorist threats.  In that regard, he thanked partners, including France and the United States, for efforts to make the Sahel safer.

No effort must be spared to protect the soldiers of peace, he said, who risked life and limb to bring safety and comfort to civilian populations.  Burkina Faso would continue to participate in peacekeeping missions.  He called for the entry into force of the Arms Trade Treaty, and to create conditions of equitable and sustainable development for all peoples through the implementation of the Millennium Development Goals.  Regarding the embargo against Cuba, he said that his country favoured lifting it.  The role of the United Nations was irreplaceable, and he supported reforms of the Security Council and the General Assembly.  Given the current state of world security, it was reasonable for there to be representatives of other continents on the Security Council.

HOR NAMHONG, Deputy Prime Minister and Minister for Foreign Affairs and International Cooperation of Cambodia, said that armed conflicts were threatening peace, stability and human security not only in the affected regions but also the world at large.  Cambodia had contributed to peace, with more than 2,000 Cambodian peacekeepers deployed to date in Lebanon, Mali and South Sudan.  Another detachment of peacekeepers would soon be deployed to the Central African Republic as part of the United Nations Multidimensional Integrated Stabilization Mission (MINUSCA), he added.

He cited climate change as a global challenge and a human security issue, noting that its pace was having "devastating effects".  Agriculture-dependent developing countries had suffered acutely, with a marked increase in the frequency of typhoons, storms, floods and draughts.  As an example, the 2013 monsoon in Cambodia had resulted in floods across the country, causing $1 billion in damages and affecting an estimated 1.8 million people.  While industrialized countries were responsible for emitting the largest amount of greenhouse gases, developing countries bore the brunt of climate change.  It was vital the international community prioritized actions to address climate change based on the United Nations principles of "common but differentiated responsibilities".  To that end, Cambodia had adopted the "Strategic Plan on Green Development for 2013-2030", which aimed to achieve economic and social development in a sustainable manner.  As a member of the Association of South-East Asian Nations (ASEAN), Cambodia was fully engaged in furthering the goals of the 2009 ASEAN Climate Change Initiative.

On the Millennium Development Goals, Cambodia explained that it had adopted its own development targets, which have been incorporated into the country's National Strategic Development Plan.  As a result, substantial progress had been achieved and Cambodia had met some of the goals ahead of schedule, including reducing the poverty rate to 19.5 per cent.  The country had also made great strides in combating HIV/AIDS, reducing HIV prevalence to 0.6 per cent in 2013.  The post-2015 development agenda should be realistic and build upon the lessons learned to ensure a "balanced and comprehensive" framework.