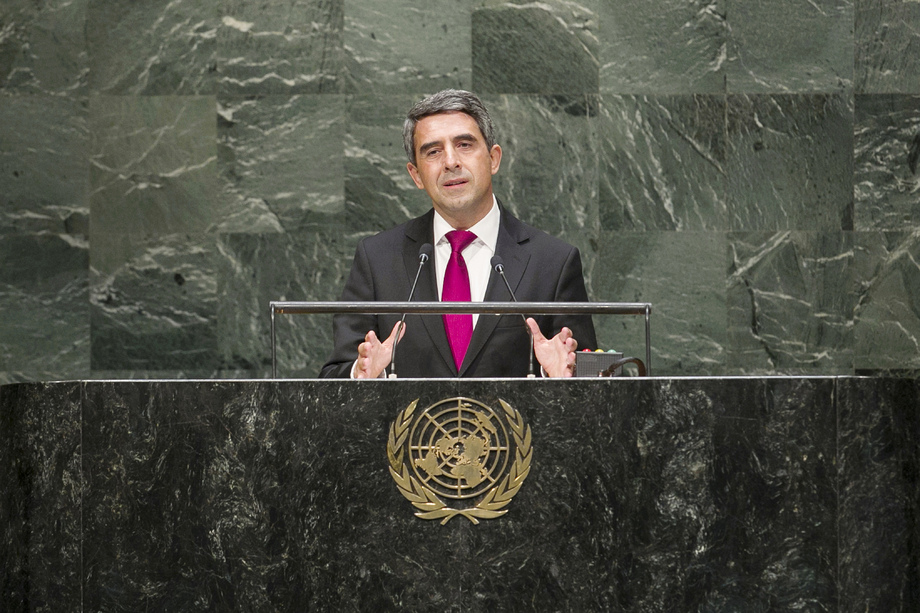 ROSSEN PLEVNELIEV, President of Bulgaria, cited the unprecedented floods that recently swept his country as an example of why climate change must be urgently addressed.  For its part, Bulgaria would actively support forthcoming negotiations aimed at reaching a legally binding climate agreement in 2015.

As we enter the critical phase of the post-2015 development debate, it was crucial that all sides remain committed to an “ambitious and forward-looking framework”, he said.  A transformative agenda would only be possible if we address the loopholes of the current Millennium Development Goals and build upon lessons learned.  The new goals should be founded on the principles of respect for human rights, good governance and the rule of law.  Youth-related targets on education, health and employment were also important.

Development was unthinkable without peace and security, he said.  The illegal annexation of Crimea undermined international order and was one of the most serious threats to peace and security in Europe since the Second World War.  The principles embodied in the Charter had been “shattered to pieces in a matter of weeks”, he said.  Bulgaria considered the annexation a violation of international law and voted in favour of General Assembly resolution 68/262 to support the territorial integrity of Ukraine.  Despite that, he welcomed the recent ceasefire agreement and expressed hope that forthcoming elections would provide the foundation for a democratic and prosperous Ukraine.

Human rights, democracy and the rule of law were at the heart of Bulgaria’s foreign policy agenda, he said.  That commitment was further strengthened by his country’s chairmanship of the Social, Humanitarian and Cultural Committee (Third Committee) during the sixty-eighth session of the Assembly.  His country would continue to promote human rights internationally and support the Secretary-General’s Human Rights Up Front initiative.  As a country that saved 48,000 Jews during the Second World War, Bulgaria was particularly concerned about recent anti-Semitic attacks taking place around the world, including in Europe, and condemned that recurring trend.