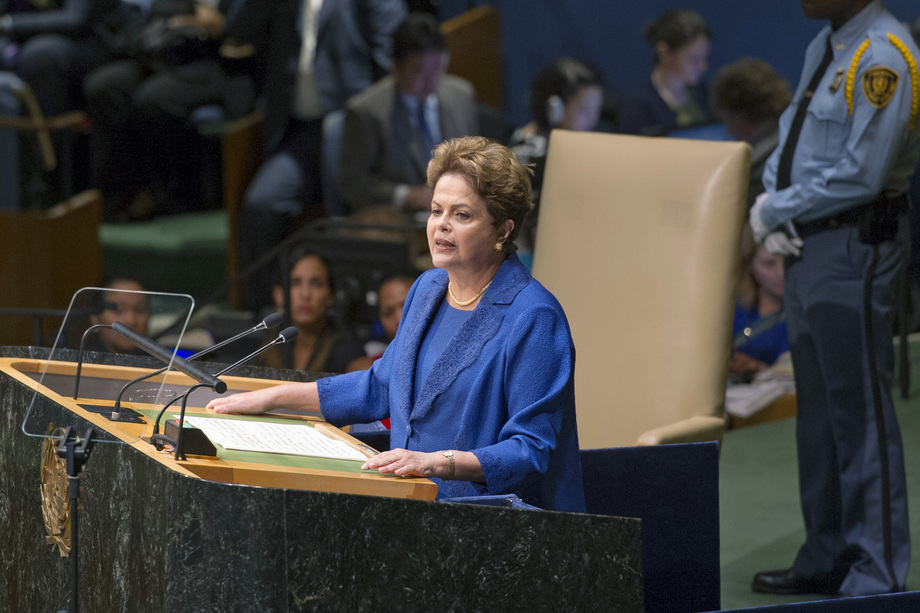 DILMA ROUSSEFF, President of Brazil, opening the general debate, noted that it was the eve of elections in her country — elections that would determine the Presidency, State governors and a significant portion of Congress. That balloting was a celebration of the democracy Brazil achieved almost 30 years ago, after two decades of dictatorial rule. Through democracy, Brazil had advanced towards economic stability, as evidenced by the announcement by the Food and Agriculture Organization (FAO) that her country was no longer on the World Hunger Map. That success had been the result of economic policies, which had generated 21 million jobs and increased the minimum wage, and had also reduced inequality.

Regarding other developments, particularly in the area of health care, she said her country had reduced child mortality before the deadline established by the Millennium Development Goals, made universal access to primary education a reality and was now focused on achieving the same with regard to secondary education. Affirmative action policies had facilitated a mass enrolment of poor, indigenous and Afro-descended students into universities. Additionally, her country had been able to resist its worst consequences of the major global economic crisis triggered in 2008 by the collapse of Lehman Brothers, and instead had followed through with income distribution by stimulating growth and employment, and maintaining investments in infrastructure.

Nonetheless, she said, it was still imperative to eliminate the disparity between the growing importance of developing countries in the global economy and their insufficient representation in the decision-making of international financial institutions, such as the International Monetary Fund (IMF) and the World Bank. The delay in expansion of voting rights of developing countries was unacceptable. On other matters, she noted the significant challenges world leaders faced in the areas of peace, collective security and the environment, and called for the long overdue reform of the Security Council.

Stressing that climate change was among the greatest challenges faced at present, she said that Brazil had been doing its part by committing to a voluntary reduction of 36 to 39 per cent of projected emissions by 2020, and reducing deforestation by 79 per cent between 2010 and 2013, among other endeavours. In its fight against discrimination, Brazil was as committed to combating homophobia as it was to combating racism and violence against women. Its Supreme Court had recognized same-sex civil unions, guaranteeing the full range of civil rights to all, illustrating her country’s belief in the dignity of all human beings and the universality of fundamental rights.

Further, on the rights of citizens, she recalled an important 2013 discussion on human rights and the Internet promoted by Brazil and Germany, noting that her country intended to deepen that discussion in the current session. She was pleased by the international community’s engagement in enhancing the current governance architecture of the Internet and noted the holding, at Brazil’s initiative, of the Global Multistakeholder Meeting on the Future of Internet Governance — NETmundial — in São Paulo in April. Her country was committed to working on that issue further, and stood ready to tackle other significant challenges faced by the United Nations and its Member States.