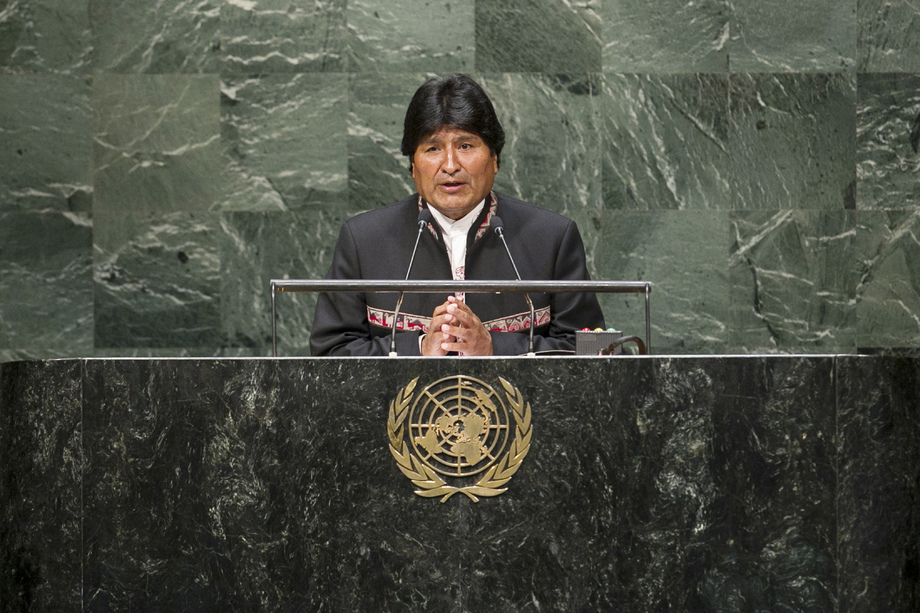 EVO MORALES AYMA, President of Bolivia, said that Mother Earth was injured by an inhumane and predatory capitalism, which turned human life and nature into merchandize.  There was an opportunity today to build a new and better world.  A shared commitment by all was needed to change the vision of development to one that was more holistic, with people living in harmony with the Earth, and in solidarity and peace.  The world had lost its respect for Mother Earth, which was a dangerous development.  Encouraged by capitalism, people had turned everything into a market, including genetic manipulation and destruction of human beings.  Economic growth did not, in itself, lead to social well-being; societies could not be exclusionary or governed by the grasping nature of the market.

He stressed the fundamental importance of recovering the control of natural resources in order to garner greater benefits for people and eliminate poverty.  It was vital to strike a balance between the rights of Mother Earth, the right to development, respect for the rights of indigenous peoples, social and economic rights, and the rights of the poor to emerge from poverty.  The human right to water was a fundamental priority, as in many regions the demand exceeded availability — a reality which would worsen as the years passed.  In 2050, 4 billion people would suffer from scarcity of water in the context of climate change.

With the national programme, My Water, Bolivia had reached the Millennium Development Goal on water, he said, declaring that human rights could not be privatized.  Water was life, and could not be the subject of profit or commerce.  To resolve major social inequalities, basic services, such as water, electricity, telecommunications, sanitation and basic health must be seen as human rights.  To eradicate poverty and hunger, the international community must fight the pitiless and inhumane forces of the market, and profoundly change the exclusionary structures of international financial institutions.  The world financial architecture must be reformed in order to eradicate financial colonialism.

He said that war fed the darkest interests, such as the geopolitical control of private commerce.  Humanity could overcome many of its problems, such as Ebola and HIV, if funds were diverted from war.  Bolivia condemned the genocidal actions of Israel against Palestine, he said, urging recognition of Palestine as a full Member of the United Nations.

Bolivia shared the belief that Syria’s future and destiny should be determined by Syrians themselves, and in that context, he condemned the United States’ interference in Iraq, which had triggered the current conflict there.  The war begun in 2003 had destabilized the entire region.  The argument that Iraq had weapons of mass destruction was the biggest lie of the imperialist era and had ultimately resulted in the creation of the “Islamic State” terrorist group.  He rejected those actions, adding that nothing justified fratricidal violence.  Wherever the United States intervened, it left misery, hate and death in its trail, but also left wealth in the hands of the arms and oil industries.  A culture of peace required the eradication of extremist fanaticism, as well as the warmongering promoted by the United States.

Waging war on war did not result in peace, he said, adding that every year, President Obama shared a discourse of arrogance and threats to the peoples of the world; that was also a discourse of extremist fanaticism.  The blockade against Cuba amounted to genocide, and must come to an end immediately.  Bolivia’s sovereign access to the Pacific Ocean must be settled through international law.  That would transform the century to one of peace, liberty and life.  There would be no peace, so long as arrogant empires harassed and killed the peoples and cultures of the world.  The empires of finance, markets and of the arms industry must give way to the wisdom of life, peace and harmony.