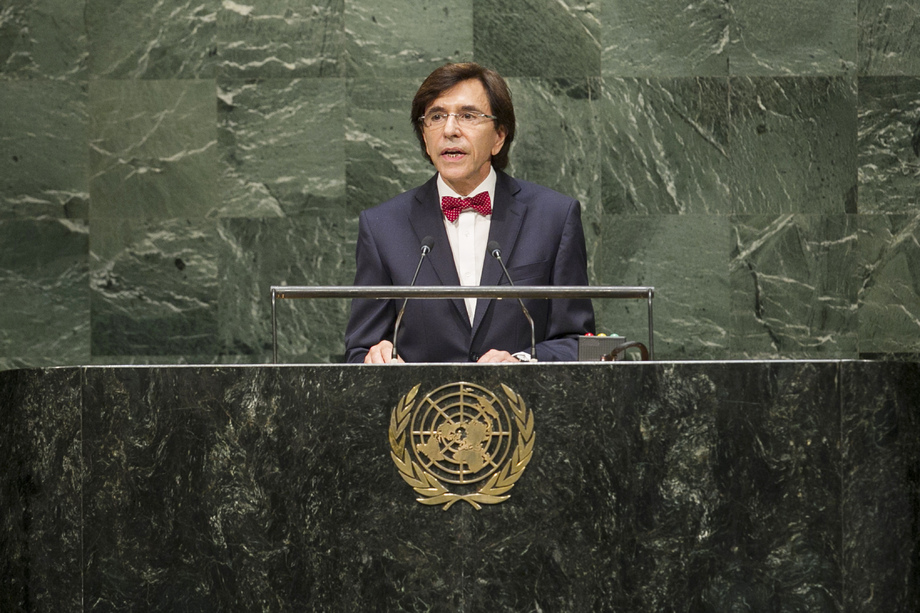 ELIO DI RUPO, Prime Minister of Belgium, named four people who had been murdered 24 May simply for being in the Jewish Museum in Brussels, but he also recalled the many killed by terrorists, in Iraq, Syria and elsewhere.  Foreign fighters among them constituted a threat to all people.  The recent resolution adopted by the Security Council was a start to addressing that threat.  In that context, Belgium had decided to send six F-16 fighters to combat terrorism in Iraq.  As stated in the resolution, efforts must be taken to prevent candidates for Jihad from reaching combat zones.  Each country must be vigilant on border control, particularly with regard to minors.  The fight was a conflict between those who valued human life, freedom, and tolerance, and the terrorists who did not.  Education was important to de-radicalize the radicals.

Political authorities who had favoured military actions, the famous "preventive war", in which Belgium refused to participate, bore some responsibility.  "How could we not see that such a war would create more radicals?," he asked.  Strengthening the rule of law and improving living conditions were the best crisis management and were more cost-effective than managing violence.  In the Middle East, he said, Belgium had watched in despair the launch of rockets into Israel and the massive bombing of Gaza.  War was not the answer to create two States living in peace.  The settlement of that conflict must be moved back to the top of the international agenda and the international community must do everything to further peace and prosperity.

Elsewhere, he said that support was needed in Africa for educational and economic development.  In the Democratic Republic of the Congo it was urgent to put armed groups far from where they could do harm, and support must be mobilized for populations dealing with Ebola.  There was destabilization on the edges of Europe as well, where recognized borders were being disturbed.  Concerning Malaysia Airlines flight 17, in which Belgian citizens had died, he urgently awaited the report of the independent experts who must have free access to the site.

There would only be peace if tolerance ruled, he said.  The role of the United Nations in the settlement of conflicts was irreplaceable as it was the only place the world's representatives could get together.  Too many were living in poverty, had no access to safe water or health services, among other things.  There would be no human progress without a normalization of global finance.  Too many women and men had no access to work or housing because they were of foreign origin; too many women faced violence for being women; and too many were discriminated against because they were homosexual, lesbian or loved differently.

Belgium was one of the most open countries in the world, he said.  It was a wealthy country, yet it had the smallest inequalities in Europe due to its State policies.  All had access to excellent health care, for example.  There was great ethnic diversity, including through immigration.  It was important not to fall into the trap of social aggression that increased inequality.  Human brotherhood was not a utopia, but it was what had allowed humans to progress.  Human brotherhood was the most powerful thing that would allow all people to share the environment and ensure that peace reigned everywhere.