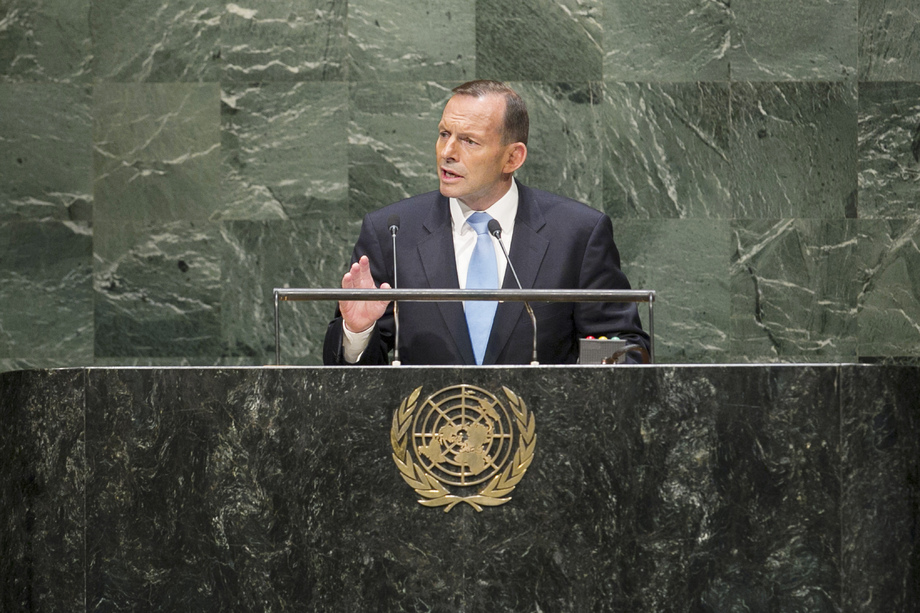 TONY ABBOTT, Prime Minister of Australia, said that while the United Nations was an "imperfect instrument", like any institution, his country had always believed in the Organization's potential and supported its work.  He highlighted that Australia — a relatively small country — had provided more than 65,000 personnel to more than 50 multilateral peace and security operations since the United Nations' establishment.  "We have never shrunk from shouldering our responsibilities," he added.

As a good global citizen, his country had pledged $8 million towards combating the Ebola outbreak and contributed health professionals to work with international agencies in the region, he said.  It had sponsored a Security Council resolution to investigate the Malaysian flight MH17 crash site and return home those who perished.  Australia would do everything to ensure that the investigation was not undermined and that the crime was not covered up.  On another matter of importance to his country, he said that, at the request of the Iraqi Government, an Australian force had been deployed to the Middle East to join the coalition to degrade the ISIL terrorist movement.

To build a better world, it was crucial to create stronger and more resilient people and communities, he said.  While a robust economy would not solve every problem, it would make most of them easier to tackle.  As this year's Chair of the Group of 20 (G20), Australia was determined to promote private-sector led growth, since profitable, private businesses were the "best source of real, sustainable, wealth".  Free trade, infrastructure, a modern international tax system, strong global economic institutions and a resilient financial sector were all part of the G20 agenda.  "When wealth increases, countries grow stronger," he said.  The goal was to boost output by an extra 2 per cent over the next five years to create millions of jobs and trillions in wealth around the world.

Likewise, the post-2015 development agenda should also focus on economic growth as it eased social challenges and that of climate change, among others.  To those who doubted that stronger economic growth could be achieved, he pointed to the rise of Asia, which, in less than two generations, had been able to undertake the greatest social and economic transformation in history.