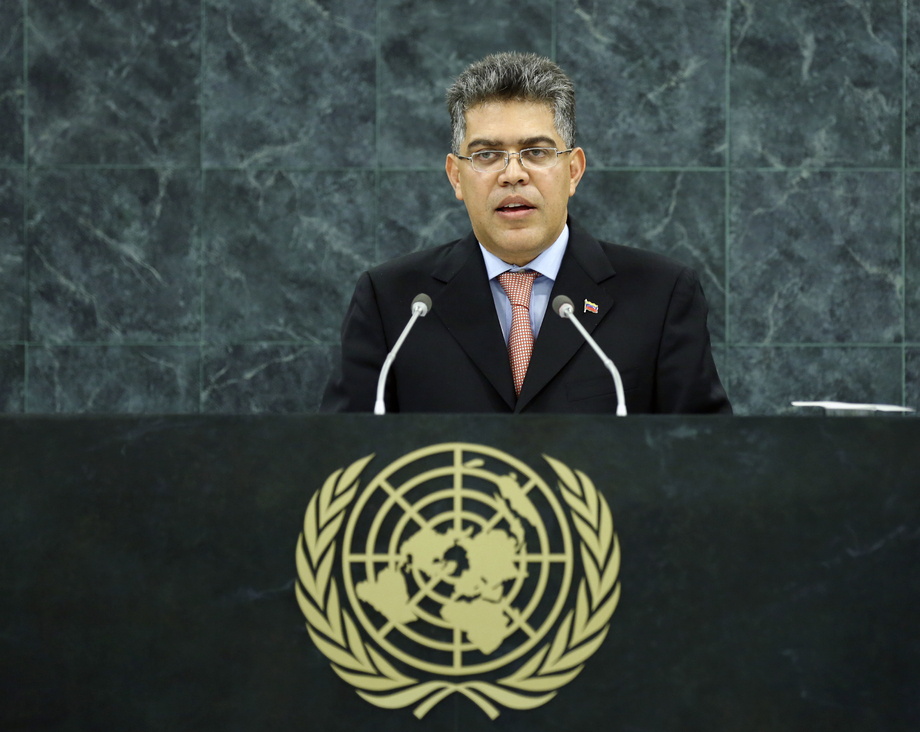 ELIAS JAUA MILANO, Minister for Foreign Affairs of Venezuela, said that President Nicolás Maduro Moros was not present because of a range of delays, conditions and a lack of guarantees imposed by the United States in flagrant violation of the United Nations Headquarters Agreement. However, he was present to speak on behalf of the people of the Liberator, Simon Bolivar, and convey lessons learned from the late leader Hugo Chavez. He wished that there could be a place where the noble ideals enshrined in the United Nations Charter could be carried out. However in the United States, various military interventions had been allowed that engulfed whole countries or regions of the world in long wars and instability. The Security Council had been taken hostage by the hawks of war. When they could do so, certain countries would justify the attacks from their seats at the United Nations. However, the purpose of the world Organization was to preserve international peace and security. But this could not be accomplished by arming terrorist groups such as Al-Qaida, which were linked to terrible acts such as the destruction of the twin towers in this very city. He asked why members of the Security Council would sponsor and support such groups, window-dressing them as political opposition. Violent groups should not be given a voice at the United Nations, he said. The preamble of the United Nations Charter stated that the goal of the Organization was to promote social progress and raise the standard of living for all. But poverty, hunger and injustice were growing, and the standards of freedom were falling. There was a neo-fascist and neo-liberal model at work. For its part, Venezuela had worked to implement a true democracy within a socialist system. It was an additional irritant that the President of the United States was a Nobel laureate and yet threatened to bomb this or that country to remove a Government that the United States did not like. He then proceeded to ask the Assembly whether the United States was not equal with the other Member States. In doing so, he questioned why sanctions were not imposed on the country that had a military base in Cuba where torture was being meted out and that had admitted to illegal espionage activities against the Heads of State and Government convened in New York. Furthermore, he was curious as to why the international community had not considered the unpiloted drones that had taken the lives of innocent people in northern Africa and the Middle East and parts of Asia as crimes against humanity. The United Nations and the diplomatic process had been kidnapped by imperialism, he said. Hugo Chavez had called for a genuine transformation of the United Nations, and seven years ago said that there was a bit of a “whiff of sulphur” at the United Nations rostrum. He was sad to say that that whiff was still present. He hoped that Edward Snowden would one day be able to walk freely among a generation of free Americans. He had showed the world that the right to privacy had been violated by the most complex spying system that humanity had ever been able to come up with. The world awoke to find that George Orwell’s 1984 was now here. But the United Nations was not trying to stop this, and the Security Council did not provide answers. The Secretary-General should set up a body within the United Nations to ensure the right to privacy and the right to communicate without being tapped, for every inhabitant of the world. Protecting the dignity of human beings should be the guiding star of humanity. He said that the leaders of the United States and those that followed them blindly should realize that if they wanted to be “exceptional” then they should find exceptional ways to bring about peace in the world.