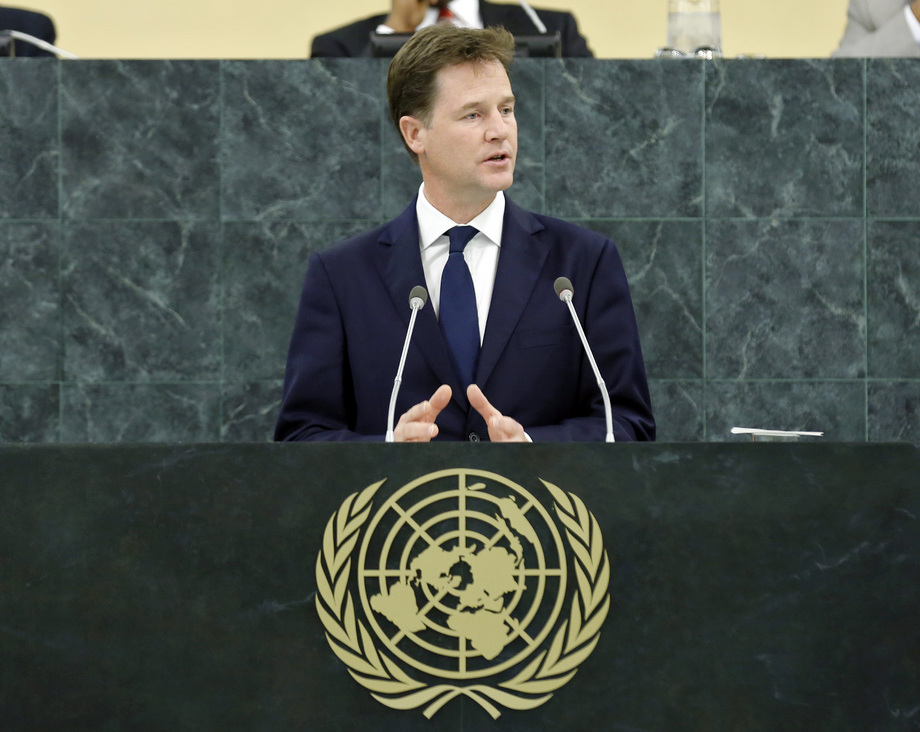 NICK CLEGG, Deputy Prime Minister of the United Kingdom, said that open societies chose democracy and freedom at home, engagement and responsibility abroad. By contrast, closed societies suppressed the liberty of their citizens, drew a veil across their actions and withdrew from shared international life. “We must be honest, the forces of insularity and isolationism have gained momentum in recent years,” he said. It was not surprising to hear some argue that liberal democracy had had its day and that the multilateral system was becoming obsolete, but those who made such claims were wrong.

Liberal democracies in Europe and across the Atlantic had weathered profound economic difficulty, he pointed out. The euro zone had not fallen over as many had said it would. Democracy had not fallen in Egypt; a single set of elections had failed, and that country must now return to the path of inclusive democracy. In Libya, the General National Congress was working towards elections in early 2014. Morocco had a new constitution and, for the first time, a Prime Minister elected by Parliament. “Well-functioning democracy cannot emerge overnight, be exported by the West or dropped on a country from 8,000 feet — that much we have learnt from the failures of the past,” he stressed.

Turning to Syria, he called upon the international community to react in unison, noting that his Government hoped that the Security Council would later today adopt a resolution establishing binding obligations on the regime for the removal and destruction of its vast chemical weapons arsenal. Yesterday, the United Kingdom had announced a further $160 billion in humanitarian support for the Syrian people, bringing the country’s total funding to $800 million. Most importantly, all parties in Syria must allow humanitarian agencies to operate without hindrance or the threat of violence. Unless that urgent access was provided, no amount of money could alleviate the scale of the Syrian people’s suffering, he emphasized.

Poverty was as great a threat to stability and freedom as conflict and oppression, he said. Despite financial strain, the United Kingdom had devoted 0.7 per cent of its gross national income on development assistance, he noted. “We are the only country in the Group of 20 to do so.” Following the global economic crisis, the Government had said it would not balance its books on the backs of the world’s poorest people, he recalled. “We have held true to our word.” Earlier this week, the Government had announced its intention to contribute $1.6 billion to the Global Fund to fight AIDS, Tuberculosis and Malaria — 10 per cent of the Fund’s replenishment — so long as others joined. As for climate change, the United Kingdom would continue to cut emissions, in addition to giving more than $6 billion to help developing countries do the same.