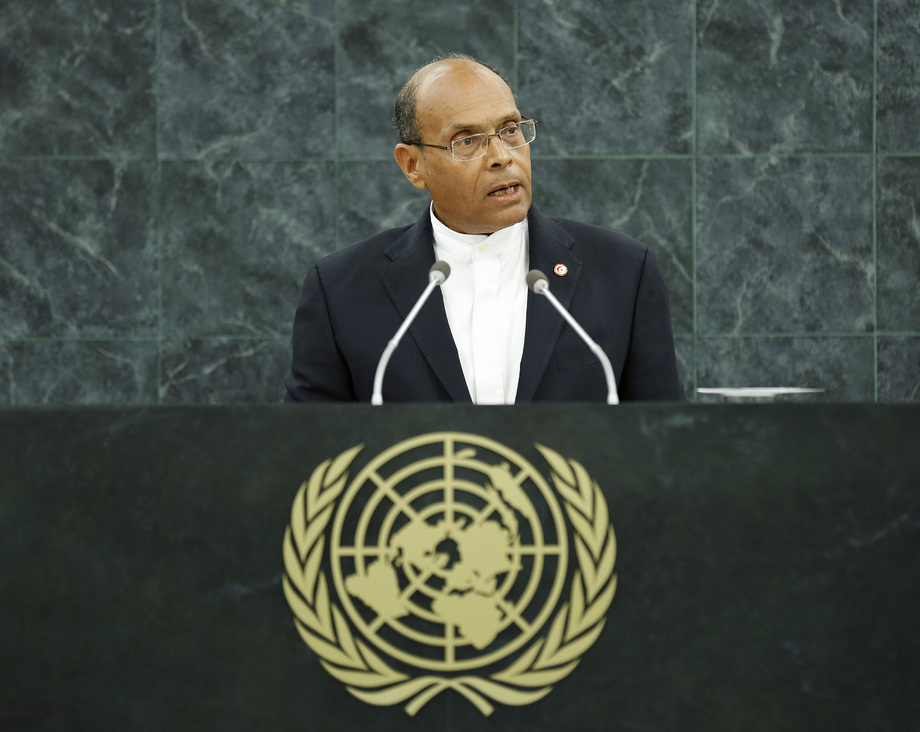 MOHAMED MONCEF MARZOUKI, President of Tunisia, recalled the fact that his country was the first country to experience the “Arab Spring”. Now, in some countries, what was happening suggested that the dream was turning into a nightmare. The entire agenda of the uprisings could not be achieved overnight, but States were on a road to brighter horizons, even if it would take considerable time, possibly even several decades, to take full control of the revolutions and give them direction. He acknowledged that it was possible that the Arab Spring could stumble and might indeed fail, but it was the international community’s duty to insist on supporting the current path. The difficulties of building democracy and peace could not lead to backs being turned. He was committed to fighting extremism and replacing it with positive patriotism, though he accepted that various political and ideological forces were pushing countries in various directions. The building of democracy and civil institutions was replete with difficulties. In connection with that, he called on the authorities in Egypt to release Mohamed Morsi, as that would help to end the political tensions and stop the violence, returning all parties to dialogue. Similarly, the issues that faced Gaza — let alone the rest of Palestine — showed the immense difficulties caused by Israel’s occupation and colonization. He listed three particular challenges that he was facing in Tunisia. The first was terrorism, which was a major political challenge. The second challenge was the slowing of investment, and the third, the need to learn democracy at the same time as trying to build and defend it. It had not yet taken root in Tunisia’s society or political traditions. There were many elements pointing to success for Tunisia, such as its responsible political class and its peaceful and politically aware people who knew their own interests. He was confident the project would succeed, stating that elections were scheduled for the coming spring. Expressing support for the role of transitional justice, he said he aspired to expanding democracy, favouring coalition governments that took into account the needs of those whose politicians did not win. The Arab Spring was suffering most in Syria, he said, pointing to violence that had astonished from the outset and which was escalating day by day. He was strongly opposed to the current Syrian Government and had expelled their Ambassador from Tunis. He warned all sides against sectarianism and stated his concern about the involvement of Tunisians in the conflict. He said that the nightmare continued to be real for the Syrian people and a political solution was vital. He supported the intervention of the International Criminal Court to protect the people against dictatorship, stating that Syria’s dictators provided the worst example of how amoral a regime could become in its actions, and such brutality had never been seen in a civil war. Syria had gone further than the most brutal regimes in history. He added that a preventive arm of the International Criminal Court could take up such situations from the very beginning, and if such a court existed, the regime would not have tried to establish hereditary rule or to kill its opposition. If such a court had existed and been able to intervene in support of human rights, the nightmare could have been avoided. He called on all influential States to express a new spirit of the international community and to support the project of such a court.