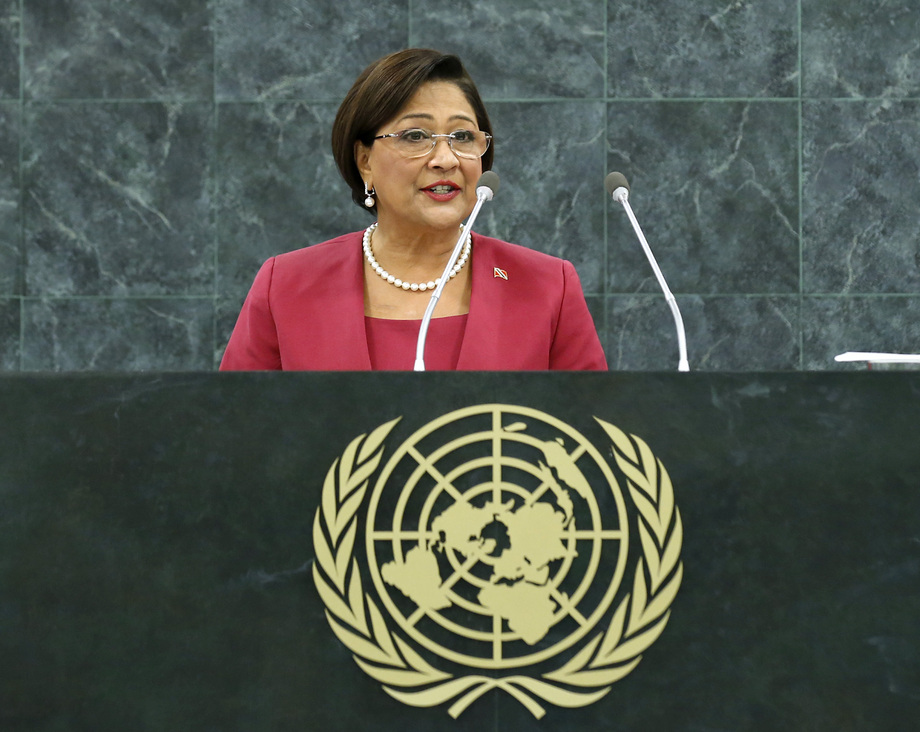 KAMLA PERSAD-BISSESSAR, Prime Minister of Trinidad and Tobago, in her capacity as Chairperson of the Conference of the Heads of State and Government of the Caribbean Community (CARICOM), opened her statement by congratulating John Ashe, President of the sixty-eighth General Assembly, saying his election was testimony to the contribution the grouping of small States continued to make to the advancement of the global agenda for peace, security and development. “Indeed it is evidence of the principle of the sovereign equality of all States enshrined in the Charter of the United Nations,” she said, adding that nowhere else was this principle more recognizable than in the General Assembly. Turning to the Millennium Development Goals, she said that, despite the early faith in the United Nations as a vehicle to assist developing countries, especially the most vulnerable, progress towards the Goals had been uneven. Stating that Trinidad and Tobago had made “tremendous strides” on the Goals, she urged developed countries to do more to help countries that had lagged behind. In addition to honouring their stated commitments, developed countries needed to do more by way of reforming their trade, tax and transparency policies and paying more attention to the regulation of global financial and commodity markets. Welcoming the General Assembly declaration adopted Wednesday for a renewed commitment to and intensification of efforts towards achieving the Millennium Development Goals agenda, she called for a more inclusive architecture in the intergovernmental process towards the post-2015 agenda based on new partnership to advance action on sustainable development. She urged the international community to recognize the unique characteristics, challenges and vulnerabilities of small islands developing States, some of which were on the frontlines of experiencing a reversal of many of their gains. Turning to the subject of small highly indebted middle income countries, she said some CARICOM members categorized as such were now deprived of concessional financing, although the impact of natural disasters, sea-level rise and climate change and debt continued to pose a serious challenge to their well-being. Calling for an immediate review of this urgent situation and appropriate remedial measures, she also demanded the end of the “anachronistic” embargo on Cuba. As peace, security and stability provided an enabling environment for sustainable development, she encouraged all States that had not done so to sign and ratify the Arms Trade Treaty agreed to earlier in the year. Voicing grave concern on the escalating humanitarian crisis in Syria, she said a solution would have to be found through dialogue. If there was evidence that individuals had committed war crimes within the jurisdiction of the International Criminal Court, steps should be taken to bring those individuals to justice.