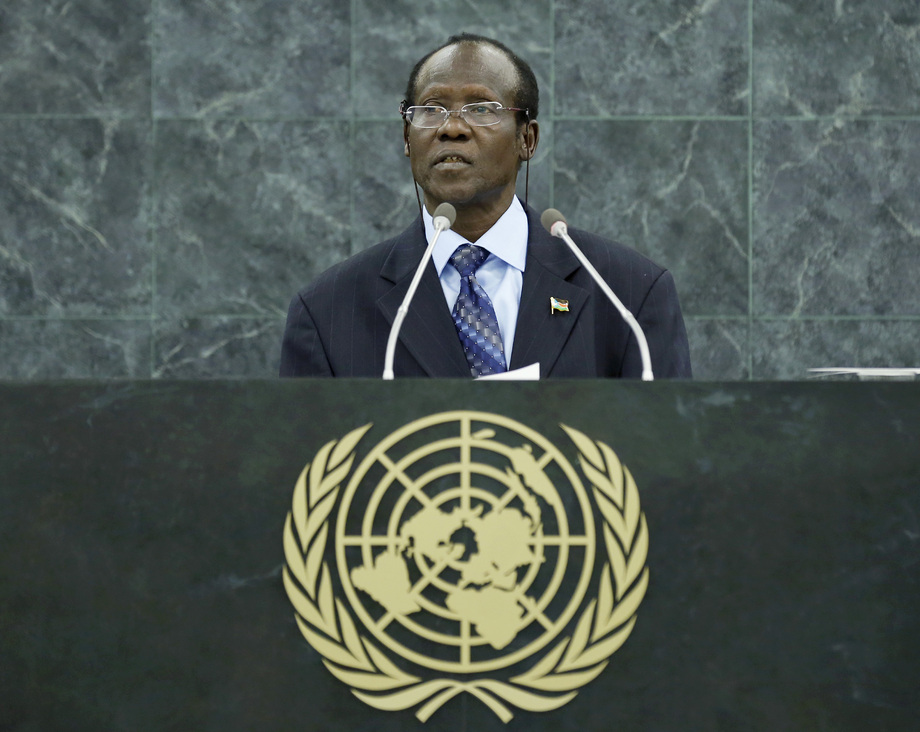 JAMES WANI IGGA, Vice-President of South Sudan, expressing condolences to the people and Government of Kenya, condemned all acts of terrorism and pledged full cooperation and support to all efforts to cleanse the region and the globe of terrorism. He thanked the United Nations, the Council, IGAD countries, the Troika and others for diplomatically helping South Sudan bring an end to the conflict that had devastated the country for decades. Given the complexity of the issues involved, the implementation of the Comprehensive Peace Agreement was relatively successful, but the protocols of the states of Southern Kordofan and Blue Nile, the contested area of Abyei and the demarcation of the borders between South Sudan and Sudan continued to impede full implementation of the peace accord.

South Sudan was well endowed with abundant natural resources, but relations with Sudan had recently involved unexpected tension with regard to the intermittent suspension of oil flow through Sudan, he said. Inside South Sudan, age-old quarrels among some communities over cattle grazing and water points had resurfaced. The task at hand was to literally build a country from scratch, with non-existent physical and social infrastructure. This had led his country to have the worst human development indicators in the world, including high maternity and infant mortality rates, and high illiteracy rates among a population of over 8 million.

There had been some improvements, however, he said. Ten States with popularly elected governors and democratic legislatures had been set up as a nucleus of good governance. Women’s literacy, which was as low as 18 per cent in the 1950s, was rising. Women’s political participation, currently 25 per cent, was also increasing. Government spending had been reduced, and non-oil revenue collection had considerably increased.

On national security matters, he expressed deep regret over the loss of the Indian peacekeepers, the Russian helicopter crew and the Kenyan and South Sudanese relief workers in Pibor County. Further, he regretted the security impediments in Jonglei, but assured the international community that South Sudan was determined to transform its army, the Sudan People’s Liberation Army (SPLA), into a professional national army that respected human rights and the rule of law, and was committed to protecting civilians. The United Nations Mission in South Sudan (UNMISS), the Office for the Coordination of Humanitarian Affairs and other humanitarian agencies had been given unhindered access to all parts of the country, including Jonglei State. Another urgent security demand was to train a police force capable of eliminating the country’s high crime rate, he said, noting that UNMISS had helped transform hundreds of former combatants into a police force conscious of the rule of law.

The relationship with Sudan had been a mixture of cooperation and squabbles, he said. Fundamentally, both sides acknowledged that given their shared history, there was no alternative to lasting peace other than harmony and cooperation. He called on the parties at war in Sudan to find a durable political solution to the conflict, and a situation for which the Comprehensive Peace Agreement had provided a workable remedy. He urged the international community to play a positive stepped-up role to narrow the gap between both parties. South Sudan remained steadfast in its vision of a country at peace with itself and with its neighbours; a country which was growing in security, rule of law, human rights and progressing to justice and prosperity.