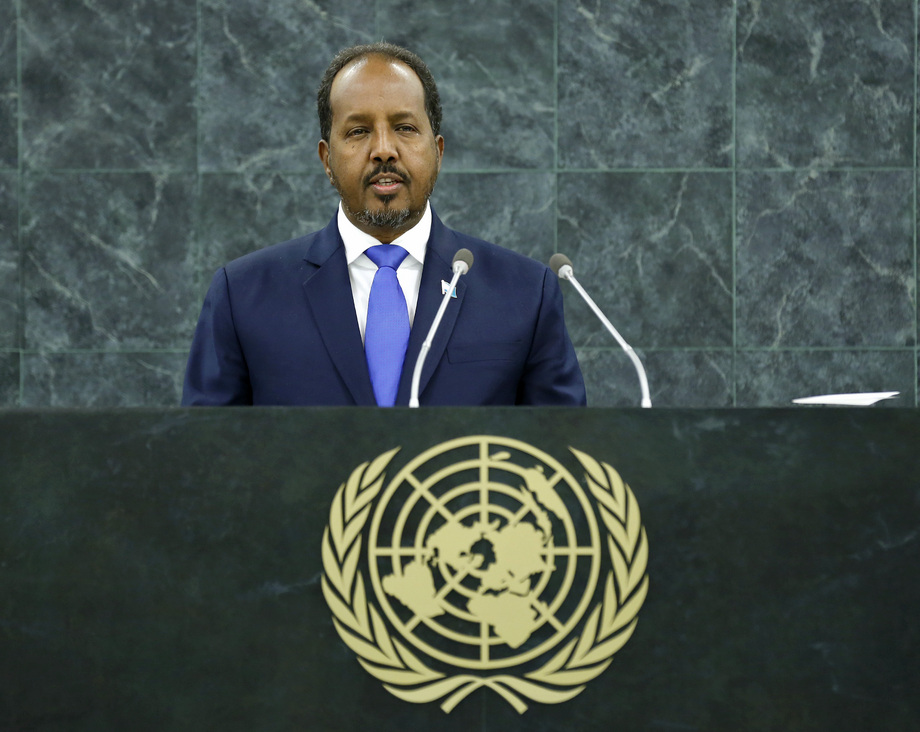 Hassan Sheikh Mohamud, President of Somalia, said he was honoured to address the Assembly for the first time and expressed appreciation for the “unwavering support” for his country, which had a permanent Government for the first time in 22 years. As the goal of the United Nations was to maintain international peace and security, it was imperative that Somalia, and other countries still suffering, had the full support of friends and allies to ensure a world free from conflict. The international community must work jointly to bring about peace and stability.

The fight against Al-Qaida, and its offshoots in the Horn of Africa, like Al-Shabaab, was far from over, as the recent attack in Kenya showed, he continued. Somalia’s Government was determined to defeat them “in the deserts and in towns, on digital and social media”, on the airwaves and the newspapers. Only by standing together, strengthening international resolve and remaining focused, could the international community weak and uproot terrorist bases. The African Union Military Observer Mission in Somalia (AMISOM) and Ethiopia needed help in fighting such enemies.

In just one year, major milestones for a new Somalia had been successfully and peacefully set forth in security, public finance management, reconciliation and good governance, he said. A compact signed in Brussels earlier in the month represented a paradigm shift in how the international community would deal with Somalia. This “new deal” aimed to help his country lay a strong foundation for building reliable, transparent, accountable and functioning State institutions. There was a pressing need to transform the lives of Somalia’s people, to reconnect with its citizens and enhance their well-being. He pointed to major steps, such as the provision of health care, access to clean water and the launch of a campaign to enrol 100,000 school children during the current academic year.

Concerted efforts were needed to finalize the Constitution, establish a federal system and prepare the ground for elections, he said. Agreements had been reached and negotiations initiated with the authorities of Puntland, Somaliland and Juba, setting the basis for a system of governance where unity would ultimately be achieved not by coercion, but through dialogue. Still, the challenges were immense, as the Vision 2016 Conference convened earlier this month in Mogadishu, had pointed out. Al-Qaida and piracy in the Gulf of Aden were, indeed, threats to the future not only of Somalia, but of the region and the entire world.

He expressed appreciation for the courageous support of the Intergovernmental Authority on Development (IGAD) and the African Union and welcomed creation of the United Nations Assistance Mission in Somalia (UNSOM), all of which aimed to bring peace and stability to Somalia. “It is much easier to start a war than to end one,” he added. In that regard, he condemned the use of chemical weapons in Syria. As a Somali who had experienced war first hand, he urged the international community to send a powerful message to those responsible. He also encouraged both sides in Syria to seek negotiations as the “only way out of this tragedy”. “Impunity has no place in this world,” he said. He regretted, however, that the trials of the International Criminal Court of African leaders had become “politically motivated”.