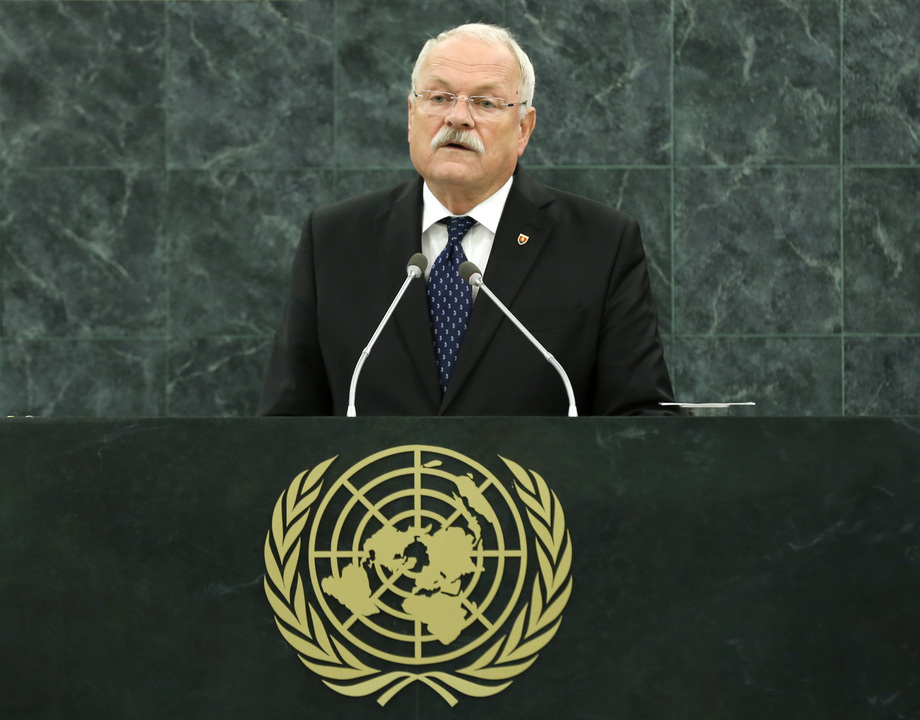 IVAN GAŠPAROVIČ, President of Slovakia, said negotiation was the best approach to resolving the Syrian conflict. “If we thoughtfully consider all the possible consequences of a military intervention in Syria, it becomes clear that there is only one good solution to this conflict — the diplomatic one.” He added, “ Slovakia principally condemns use of chemical weapons as a crime against humanity and urgently asks to bring the perpetrators before the International Criminal Court.” The United Nations’ continued engagement was essential. Mr. Gašparovič said his country was engaged in international crisis management, including in Afghanistan, where it had provided military, as well as civilian and humanitarian aid. Security, economic development, good governance, human rights protection for all and free elections must be the founding pillars in building a new Afghan State. The key to success of all the processes even beyond the presidential election in 2014 was national reconciliation. Afghanistan also needed consistent, predictable and targeted assistance, both from its neighbours and the entire international community. Cooperation between the United Nations and regional organizations was pivotal in that regard. He said Slovakia also had strongly supported the United Nations in addressing conflicts in Africa. There, too, cooperation with regional organizations, such as the African Union, was critical to successful conflict-resolution, although the continent still needed the international community’s attention and assistance. Regarding the Middle East, “ Slovakia welcomes and supports the renewal of talks between Israel and Palestine”, but it seemed, however, that “talks are not enough”. There had been no compliance with a number of binding agreements and resolutions; he expected more from agreed solutions. Touching on other areas of concern, he said terrorism remained one of the most serious threats, and everything must be done to reach agreement on a comprehensive convention. He heralded the recent signing of the Arms Trade Treaty and expressed hope that joint efforts within the international community would ensure the Treaty’s swift entry into force. Slovakia also actively supported entry into force of the Comprehensive Nuclear-Test-Ban Treaty, which it considered an important pillar of both nuclear disarmament and non-proliferation. He said he considered the rule of law an inseparable part of security; “if we cannot give people security, safety, education and jobs, they will be quick to draw guns again in desperation”. Unfortunately, his country’s own experience proved that. Another challenge was the lack of public funds and resources, which had made attaining the Millennium Development Goals a challenge for Slovakia, particularly since a number of system deficiencies in distribution and control of resources had been revealed as a result of the recent economic and financial crisis. Until recently, Slovakia had received development aid, but given its experience with political and economic transition, the country was now well positioned to take on a more active role in supporting others dependent on assistance from the international community.