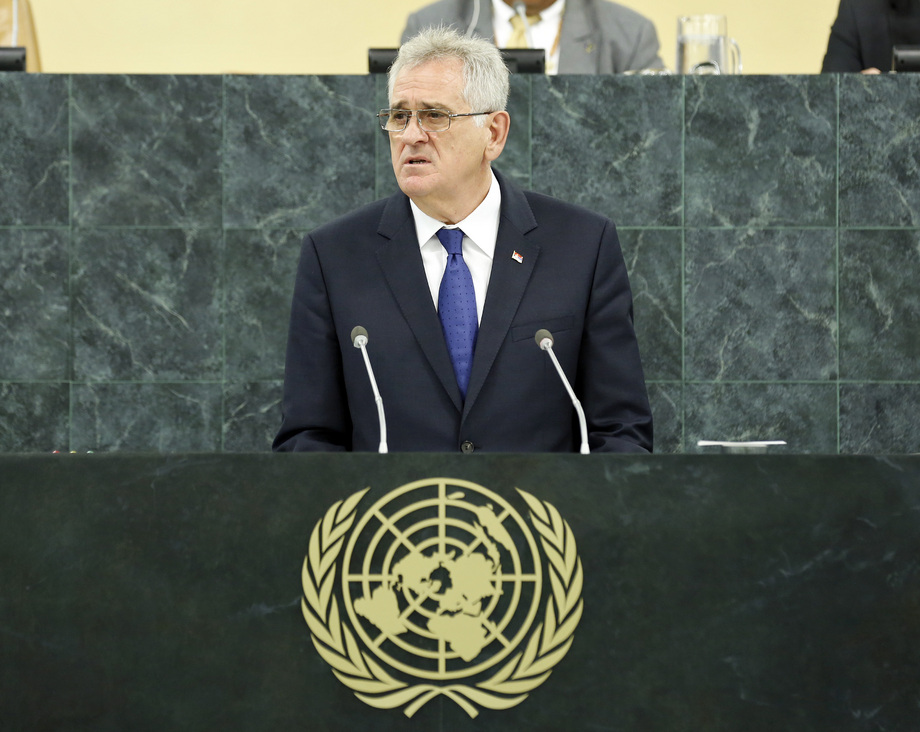 TOMISLAV NIKOLIĆ, President of Serbia, said that ahead of the impending deadlines for the Millennium Development Goals, the United Nations and the world were at a crossroads and must take action. In identifying future sustainable development goals, priority should be given to energy efficiency, renewable resources, and climate change. Key development goals should deal with sustainable economic development, because devoid of that, it would be impossible to achieve social development or reduce hunger, poverty, unemployment and inequality, prevent wage disparities, or protect the environment.

However, he stressed, there could be no development — sustainable or unsustainable, economic or social — in war-torn areas. Serbia had been participating in peacekeeping operations for decades and was engaged in multinational operations in Côte d’Ivoire, Liberia, Democratic Republic of the Congo, Haiti, Lebanon, Cyprus, the Middle East region, Uganda, Somalia, and, soon, in Mali. In that capacity, Serbia had no other interest than to “help the friend in need”. Along with war, terrorism loomed large over the core values of the United Nations, threatening human rights and impeding business, thus undermining development as well. As a State party to most global counter-terrorism instruments, Serbia attached great significance to international activities aimed at suppressing terrorism, and it was adjusting its domestic legislation to stem the scourge. As a victim of terrorist attacks, the country understood the need for regional and broader counter-terrorism cooperation and believed it was of utmost importance to make progress on a comprehensive anti-terrorism convention.

Serbia was party to nearly all international instruments and initiatives in the fields of disarmament, non-proliferation, and arms control, he said, adding that its commitment to the Arms Trade Treaty, which it had recently signed, was based on the belief that the establishment of a set of legally binding international standards was a significant contribution to eliminating the illegal arms trade. Serbia had no secret weapons and had never been a threat to any country, nor had it ever or would it ever possess weapons of mass destruction.

The unilaterally declared independence of Kosovo in 2008 was creating a problem, and undermined the system established by the United Nations since its inception, he said. The illegal secession attempted by the Provisional Institutions of Self-Government of Kosovo had never been recognized by the United Nations; however, some countries recognized Kosovo as a State, including some traditional friends of Serbia, because they had been put under constant pressure and blackmail by big and powerful nations. Those problems needed to be solved peacefully, and Serbia intended to protect the Serb community in Kosovo and Metohija as far as possible and to ensure normal everyday life in the province. Further, Serbia did not intend to agree to the admission of Kosovo to membership in the United Nations and other international organizations.

He said the work of the United Nations Interim Administration Mission in Kosovo (UNMIK) and European Union Rule of Law Mission (EULEX) should continue. Unfortunately the International Criminal Tribunal for the Former Yugoslavia had abused its mandate, and to address some of the wrongs, convicted Serbs should be sent to serve their prison terms in Serbia, with eventual reintegration into society. The Serbia of tomorrow and today should be trusted.

Speaking in exercise of the right of reply, the representative of Serbia said the consolidation of regional peace, security and stability was a priority of the highest order for her country, which fully shared the vision of the Balkans working together, in defiance of a history of war and conflict.  Unfortunately, the statement by Albania had praised a unilateral action infringing on the basic principles of the United Nations and that was a clear violation of the Charter.  That ran counter to all efforts so far to achieve a sustainable solution to the southern provinces of Kosovo and Metohija.   Belgrade and Pristina had reached agreement only over clearly defined matters, such as municipal elections.  Her country would not accept Kosovo’s independence.  Her country was investing wisely in courageous efforts, whereas Albania’s could not contribute to the strengthening of confidence and resolution among the Balkan States.

Resolving the status of the southern provinces was a foremost priority for Serbia, she said, adding that time and time again, it had demonstrated its readiness and will to overcome the accumulated problems.  Serbia had invested great flexibility to bring about a solution that was acceptable to all and which took into account the legitimate interests of all communities in Kosovo and Metohija.