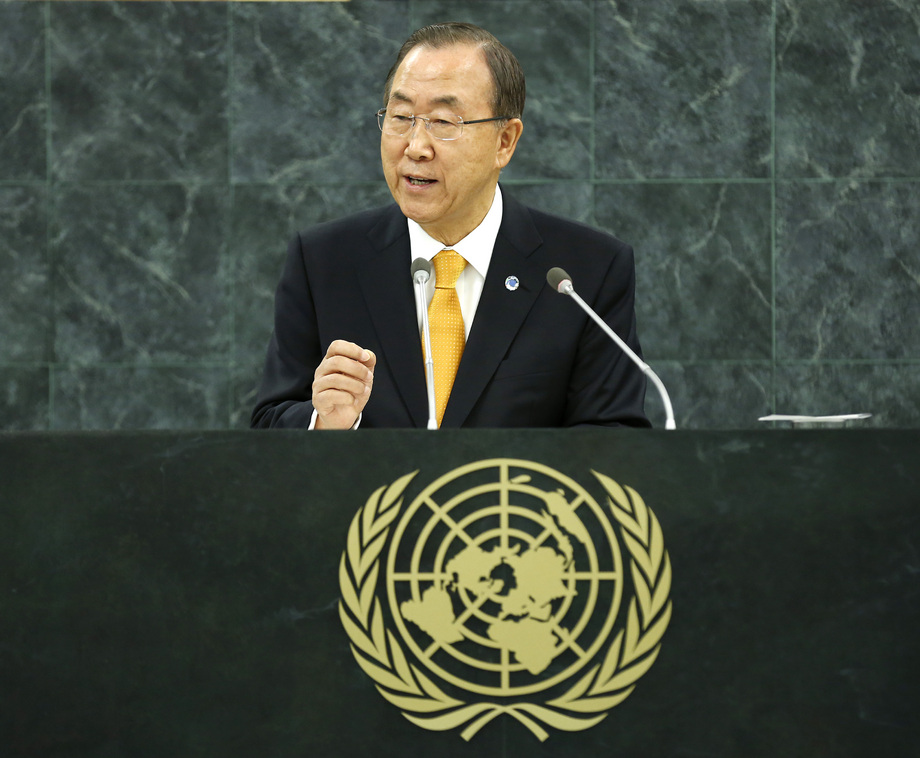 BAN KI-MOON, Secretary-General of the United Nations, opening the general debate, said the world was in an “era of wondrous opportunity”, as it was the first generation that could wipe out poverty from the face of the Earth.  However, pressures on the planet, like youth unemployment, climate change and unresolved conflicts were building, while events on the ground were outpacing institutions and systems designed for another age.

The Millennium Development Goals, he said, “captured the imagination, generated remarkable gains and beat back doubts”, but progress on some lagged badly and inequality grew.  The new development agenda needed to inspire like the Millennium Development Goals, but go further.  It needed to prioritize ending poverty, with sustainable development at its core, and governance as its glue.  It must find expression in a single set of goals — not deferring the environment or social justice for later, once economic growth was assured.

Moreover, he said, women’s empowerment and rights must be at the heart of it all.  The equation was simple:  when girls were healthy and in school; when legal frameworks and financial access supported women; when women’s lives were free of violence and discrimination, nations thrived.  He added his voice to the leaders who would gather this afternoon to adopt a declaration against sexual violence in conflict.  “Let the twenty-first century be the century of women,” he declared.

The private sector would also be essential to post-2015 development, he said, encouraging companies to innovate and create jobs.  Equally, they needed to remain ethical, responsible and committed to protecting the environment.  He recalled the United Nations Global Compact Summit last week when businesses promised to do more to align their goals with those of the United Nations.  The United Nations itself needed to find more ways of working with businesses and finance, but also with civil society and philanthropic organizations.

He warned of the threat to sustainable development posed by climate change, saying that the poorest and most vulnerable were first to suffer and suffered the most.  The message from the planet, and from scientists, was clear, as would be evidenced once more this week when the Intergovernmental Panel on Climate Change issued its latest assessment.  There was opportunity amid the peril — a chance to change the way we do business, plan our cities, fuel our homes and factories, and move our goods and ourselves.  “A low-carbon path beckons — a path that can create jobs and improve public health while safeguarding the environment,” he said.

The Climate Summit to be held in New York in September 2014, he added, would be a chance to bring bold pledges to innovate, scale-up, cooperate, and deliver concrete action to close the emissions gap and put the world on track for an ambitious agreement through the United Nations Framework Convention on Climate Change.

Turning to the crisis in Syria — the “biggest peace and security challenge in the world” — he said that well over 100,000 people had been killed, more than 7 million people, or a third of the population, had fled their homes; families were under siege; cities and towns lay in rubble; the economy was in ruins; and communities, once alive with a blend of traditions and faiths, had been torn apart.

The region, too, he said, was being dangerously destabilized.  “We have seen the worst chemical weapons attack on civilians in a quarter century,” and a lost generation of young people now filled refugee camps.  “Who among us can say that they, and their mothers and fathers, are wrong to feel abandoned by the international community?”, the Secretary-General asked.

The Syrian Government must fully and quickly honour the obligations it has assumed in acceding to the Chemical Weapons Convention.  The international community must bring to justice the perpetrators of the use of chemical weapons in Syria — confirmed “unequivocally” by the United Nations investigation mission.  The international community must also, with equal determination, ensure the safeguarding and destruction of Syria’s chemical weapons stockpiles and programmes.  “But, we can hardly be satisfied with destroying chemical weapons while the wider war is still destroying all of Syria.”

He said most deaths had been caused by conventional weapons, and he appealed to all States to stop fuelling the bloodshed and to end the arms flows to all the parties.  He looked forward to the imminent adoption of an enforceable and binding Security Council resolution on chemical weapons, followed immediately by humanitarian action.  He called on the Syrian Government and the opposition to uphold international humanitarian and human rights law, urging it to lift all obstacles to humanitarian access and end the “unconscionable” targeting of medical facilities and personnel.  It must release the thousands of men, women and children whose detention had no basis in international law.

He called for full accountability for serious international crimes, either through referral to the International Criminal Court or by other means consistent with international law.   The response to the heinous use of chemical weapons had created diplomatic momentum — the first signs of unity in far too long.  “Now, we must build on it to get the parties to the negotiating table,” he said, stressing that military victory is an illusion.  The only answer was a political settlement, he said, appealing to the Syrian Government and the opposition, and, to all those in this Hall with influence over them, to make the Geneva II conference happen as soon as possible.  “It is time to end the killing, and to reach the peace the Syrian people need and deserve,” he said.

Apart from Syria, he said, there was tremendous stress and upheaval across the region.  Historic transitions had stumbled or slowed; springs of inspiration were giving way to winters of disillusionment.  The challenges were immense:  building democracy and pluralistic dialogue; dousing the flames of sectarianism; filling the security vacuum after the iron grip of dictators is gone.

But, the story was still being written, he said, adding that everything must be done to help these reforms succeed; “we must seize potential openings and respond to declarations of good will”.  Each nation would chart its own course, but “we cannot be complacent where there is backsliding, but rather insist on respect for universal values:  human rights, tolerance and political inclusion”, as those were the foundations of peace and prosperity.

He welcomed the re-engagement of Israelis and Palestinians in direct negotiations, and the bold diplomacy that made that possible, adding that if all were serious about achieving a two-State solution, then they must recognize that the window was closing fast.  Urging the parties to show leadership — and a sense of the long-term interests of their peoples and the region, he said he would convene a meeting of the Quartet principals meeting later this week.

Looking beyond the Middle East and North Africa, he said he saw Africans “writing a new narrative of dynamism, democracy and sustained, impressive economic growth”.  Political progress in Somalia, credible elections in Mali, more robust peacekeeping in the Democratic Republic of the Congo and a new framework of hope for the Great Lakes region were gains to build on.

At the same time, the misery and volatility in the Sahel continues, he said, noting the breakdown in law and order in the Central African Republic, with millions cut off from assistance and facing abuse.  Yet, like the humanitarian appeal for Syria, the call for help for the Central African Republic was woefully underfunded.  And, in the past week alone, the appalling attacks in Kenya, Iraq and Pakistan were grim reminders about the ability of terrorists to cause havoc and harm.

Throughout the world, he continued, the centrality of human rights and the rule of law emerged as foundations of stability and coexistence.  It was time to reinforce the commitment to the cause of international law, and to the International Criminal Court.  On behalf of the Extraordinary Chambers in the Courts of Cambodia, he appealed for remedial action to reverse its deep and chronic funding shortage, saying the court’s financial failure would be a tragedy for the people of Cambodia, who had waited so long for justice.

The inability of Member States and the United Nations to prevent and put a stop to large-scale human rights violations had had disastrous consequences, he said, adding that an internal review of United Nations action at the end of the war in Sri Lanka had identified a systemic failure:  Member States did not provide the United Nations system with support to meet the tasks they themselves had set; and the system itself unfortunately did not adapt properly or deliver fully.

In this twentieth anniversary year of the Vienna World Conference on Human Rights, “we should renew our commitment to the [United Nations’] founding principles,” he urged, outlining his plan to help Member States reach consensus to prevent large-scale violations and to ensure that the United Nations upheld its responsibilities.

“There will be little peace or enjoyment of human rights unless we confront a world awash in deadly weapons,” he went on.  The past year saw the promising adoption of the Arms Trade Treaty, finally regulating the international transfer of conventional weapons, but nuclear disarmament is languishing, deadly weapons were proliferating, the Comprehensive Nuclear-Test-Ban Treaty was still not in force and small arms continued to kill and maim.  And, at a time of pressing human need, spending on weapons remains absurdly high.  “Let us get our priorities right and invest in people instead of wasting billions of dollars on deadly weapons,” he said.

To the membership, he said:  “You, the leaders, are here to serve we, the peoples.  We can be the ones who preside over an end to poverty, give voice to the will of the people and usher in an era of sustainable development and lasting peace.  You can tackle the toughest problems today — and make your foresight a gift to future generations.”

With that, he urged them to embrace the “global logic of our times”.  With fates evermore entwined in today’s transformed global landscape, new ways of governing, partnering and problem-solving must be found.  “Let us empower the United Nations to be more than a first responder or a last resort.”

“You, in your home countries, and we, here together, are at a privileged pinnacle.  We must prove ourselves fit for purpose.  We must listen to the just demands of the world’s peoples and hear the call of history,” he urged.  The duty was to turn hope into action, through hard work, commitment, skill and integrity.

With passion, but most of all with compassion, it would be possible to build the future people wanted — and that the world needed.  “Let us build our world better for all.  Let us shape our future where everybody can live harmoniously with peace and dignity,” he concluded.