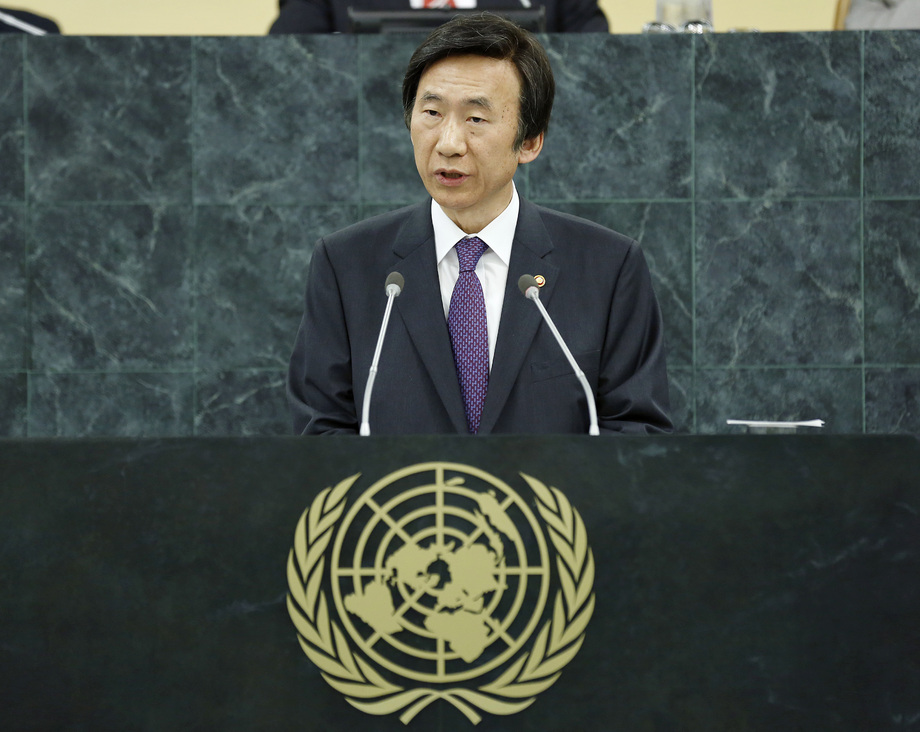 YUN BYUNG-SE, Minister for Foreign Affairs of the Republic of Korea, underlined his country’s global engagement globally in peacekeeping and reconstruction as well as in its membership of the Security Council and the Human Rights Council. However, the rise of new global challenges such as climate change, terrorism and cybercrime called for global cooperation that transcended the existing inter-State system. The Republic of Korea’s new Administration had put forward its foreign policy vision for building on two fundamental objectives — happiness of the people and happiness of the global community. The proliferation of weapons of mass destruction posed serious threats to international peace and security, he said, strongly condemning the use of chemical weapons in Syria. He welcomed the agreement between the United States and the Russian Federation on elimination of those weapons and called on the Syrian Government faithfully to implement its commitments in that respect. He also called for concerted international efforts to roll back the nuclear weapons programme of the Democratic People’s Republic of Korea. Alongside the proliferation of weapons of mass destruction, terrorism also presented a grave threat to international peace and security, he said, strongly condemning the terrorist attack in Kenya. Noting that the number of refugees and internally displaced persons worldwide had risen, worsened by the conflict in Syria, he emphasized the need to protect civilians in conflict situations, especially from sexual violence, and called for responsible measures to restore the victims’ honour and soothe their pain. The next set of common development goals should therefore be people-centred, taking standards of well-being beyond traditional income levels and seeking to build partnerships with newly emerging development actors as well as striving for a united response to climate change. “The deepening of global interdependence has led to the rise of challenges requiring a common response, and therefore, expectations of the United Nations are now higher than ever before,” he said.

Responding, the representative of the Republic of Korea said on the issues of the nuclear programme and missile launch that the North had claimed that there was another part of the story to its nuclear development programme.  It was very clear that there were no nuclear weapons in the South.  Tension in the region had its roots in the North’s continued nuclear launches and tests, he said, describing his Northern counterpart’s argument as “only a ridiculous attack”.  On the claim the North had only launched a satellite, he emphasized that Security Council resolutions 1718 (2006), 1874 (2009), 2087 (2013) and 2094 (2013) clearly demanded that the North not conduct any launches using ballistic missile technology.  Given its track record of nuclear tests and missile launches, the North had no right to claim any peaceful uses of outer space.  Furthermore, it was bound by its obligations under the relevant Security Council resolutions, he pointed out.  On the parallel policy of economic development and nuclear disarmament, the Democratic People’s Republic of Korea had provided a rationale for its policy, but the pursuit of nuclear weapons was a violation of international law.  That country’s Government received $10 million from the United Nations annually, and it was a pity that it squandered those resources on nuclear development when it should instead use them to improve the lives of its people, he said.  Regarding family reunions, he expressed regret that the North had unilaterally cancelled them just four days ahead of the event, which had been planned as a humanitarian event intended to heal the people’s pain.  The cancellation had shattered the hopes of 200 separated families selected for the occasion from among 10 million people.  They had been eagerly anticipating meeting their estranged kindred, he said, urging the Democratic People’s Republic of Korea to reverse its inhumane decisions and help heal the wounds inflicted on the peoples and soothe their anguish.

The representative of the Republic of Korea said his counterpart continued to blame others, but the Security Council had not been alone in condemning his country’s nuclear tests.  The Council had unanimously adopted resolutions on the Democratic People’s Republic of Korea, with all permanent members supporting adoption.