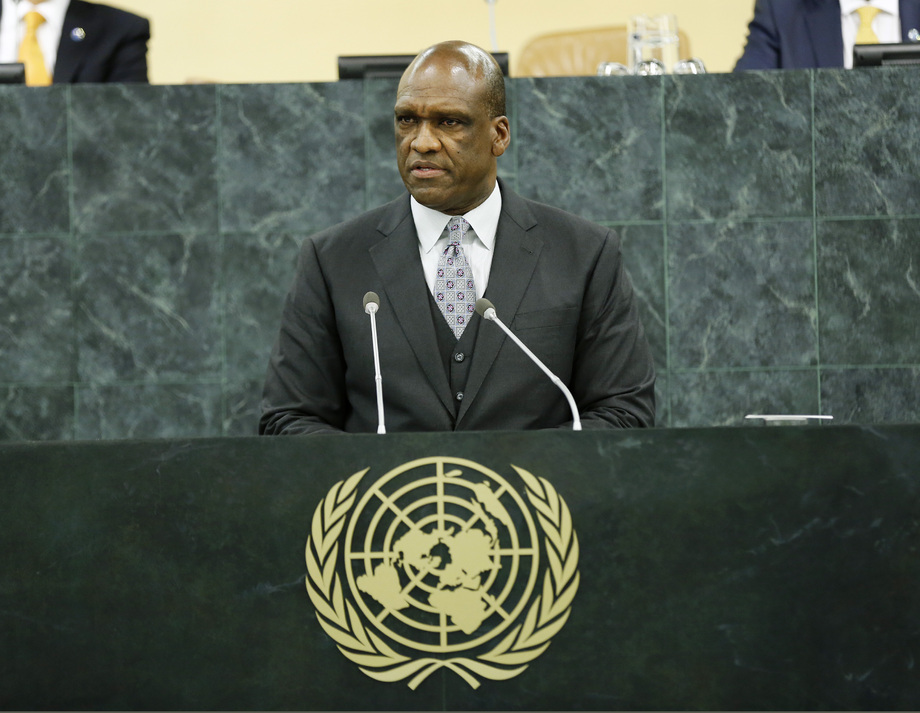 JOHN ASHE, General Assembly President, noted that he had been born in a household of seven kids nearly 60 years ago on the twin-island nation of Antigua and Barbuda, in the Caribbean.  His parents had never had the opportunity to complete high school and could not provide academic guidance to their offspring.  One child, whose paternal grandfather had signed his name with an “X” and whose mother was a descendant of slave plantation owners in the sister island of Barbados, had been determined to be the first in his family’s generation to attend university and seek an opportunity, wherever it might occur, to make a difference.  “I am that child of those parents,” he declared.

The current session was convened, at a time in history, when the Organization was, itself, in the process of change, he said, adding that:  “I not only refer to physical changes, but to the task of crafting a more responsive United Nations with a new strategic thrust, which will shape global development beyond 2015.”  The annual gathering of world leaders and dignitaries should not be seen just as “another September routine or tradition”, but as an opportunity for Member States and other stakeholders to recommit to the noble ideals that lay at the Organization’s core.

Yet, he noted, the world’s headlines were filled with reports of wars — imminent or impending; civil and sectarian bloodshed and strife between, as well as within, States; grinding poverty and malnutrition; gender violence; adverse effects of climate change and loss of valuable biodiversity; and the struggles of men, women and the young seeking to live with human dignity and peace.  Now with clear awareness that the scourge of chemical warfare had been unleashed in Syria, the international community was confronted by a need to address that wrong.

Further, the world had seen rising ethnic and religious extremism, gender inequities, growing unrest and political tensions, and increasing socioeconomic inequalities, he said.  Women were dying in childbirth, female children were marrying before the age of 10 and young people dared not dream of a future because they knew all too well there might never be one.  “And yet, we are gathered here today, despite the odds that are against us, to give human expression to the hard work it takes to make multilateralism work for the benefit of all,” he declared, stressing that effective multilateralism required dogged determination and a commitment to negotiate and work cooperatively.

Confessing that he was exposed to enormous pressures from various sides on any particular issue relevant to the mandate of the United Nations, he said that the paradox was that Assembly President was without power to commit Member States to a particular course of action, and must remain, not only neutral, but be seen as such, if she or he was to retain any credibility.  She or he could do no more than reflect, and appeal to States to work together, in the hope that appropriate and requisite international cooperation would be achieved.

Quoting forebears, he said that, when facing overwhelming odds, “it is not our limitations that define us; rather, it is what we do to overcome them”.

There had been some encouraging achievements by the Assembly, he said, referring to the 2 April adoption of the Arms Trade Treaty regulating the illicit trade in small arms and light weapons, which was signed by 83 States and ratified by four, as well as efforts to craft a post-2015 development agenda.  Citing the theme for the current session, “The Post-2015 Development Agenda:  Setting the Stage”,  he said the new development agenda was expected to have poverty eradication as its central and overarching goal and to address the inseparable link between economic growth, equity and social inclusion, and environmental sustainability.  The new framework was envisaged as the most far-reaching and comprehensive development-related endeavour ever undertaken by the United Nations.

On one hand, he said, there was an urgent need for tangible results and action by the Assembly, while, on the other hand, high levels of pessimism and cynicism persisted.  “Let us prove the nay-sayers wrong,” he urged.

World leaders assembled here from different States, each with its own particular set of strengths, challenges and needs, and from different regions, cultures and faiths, but all sharing the single purpose of helping to ensure that the Assembly would “take us further along the road to creating the kind of world envisioned in our Charter — a world of security, peace, justice, adherence to the rule of law, respect for the planet, tolerance, equal rights for all, social progress and faith in the dignity and worth of the human person”.

“Recognizing how far we have come, conceding how far there is yet to go, let us all recommit to the path of protecting the planet and ensuring peace, prosperity and dignity for all who inhabit it,” he concluded.