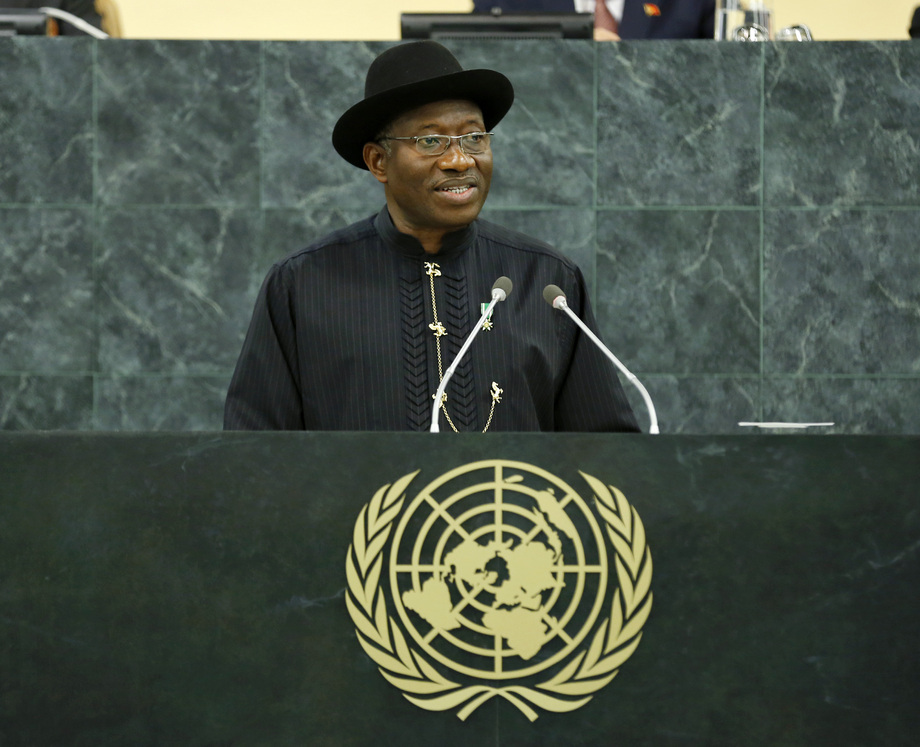 GOODLUCK EBELE JONATHAN, President of Nigeria, welcomed the theme of the sixty-eighth session and the consultative nature of the post-2015 development agenda, whose global outreach had increased national ownership of the agenda. He added that 2015 was not a destination, but only a milestone to a better world. The “post-MDGs” framework particularly resonated in Africa, where the challenges of poverty, illiteracy, food insecurity and climate change continued to engage the political leadership’s attention. The good news, he said, was that sustained democratization across the continent had made a difference in governance processes, institutions and structures. A “renascent” Africa had moved away from the era of dictatorship to a new dawn, where the ideals of good governance and an emphasis on human rights and justice were beginning to drive State-society relations. That present African reality “must replace the old prejudices and assumptions about the continent”. Despite much progress towards democratization, he said, Africa still required continued support. At the same time, Africa was no longer merely a “destination for aid”, but a continent involved in constructive, multisectoral exchanges on the global stage and ready to engage as a partner in formulating a global development agenda. For the post-2015 development agenda to be realistic, it must be “backed up by a robust financing framework”. On the issue of sustainable peace and security, he underlined Nigeria’s participation in ensuring the continent’s stability through interventions led by subregional and continental organizations. He applauded the recent Presidential elections in Mali and hoped for a successful political transition process in Guinea-Bissau. African leaders sought a transformation of the continent that rebranded it positively. In support of United Nations’ efforts to address the global initiative to combat the illicit trade in small arms and light weapons, he said his country had redoubled efforts to address that onerous challenge within its borders and across the West African subregion. He also recognized the need for a broad-based global partnership in the on-going battle against trans-border crimes, including terrorism and acts of piracy. In Africa, small arms and light weapons were the weapons of mass destruction. He, therefore, welcomed the adoption of the Arms Trade Treaty, which fostered an era of accountable conventional weapons trade, noting that Nigeria had ratified it and would engage in its implementation. Terrorism, he said, undermined the capacity for sustained development and, in Nigeria, the threat in a few States in the northeast challenged national stability. “We will spare no effort in addressing this menace,” he said, adding that the Government was, therefore, confronting it with every resource at its disposal. Declaring that the reign of terror anywhere in the world was “an assault on our collective humanity”, he said that, three days ago, the stark reality of that menace was again brought to the fore by the “dastardly” terrorist attack in Nairobi, Kenya. “We must stand together to win this war together.” Turning to the situation in the Middle East and Syria, he said that Nigeria condemned the use of chemical weapons and applauded the current diplomatic efforts to avoid a further escalation of the crisis. The nuclear weapon threat, which he defined as “a threat to the survival of human race”, was as unsafe in the hands of small Powers as in major ones, and it was a collective responsibility to urge the international community to respond to the clarion call for a peaceful universe in an age of uncertainty. He called on the international community to adopt measures and policies that would promote nuclear disarmament. He also called for the democratization of the Security Council and announced Nigeria’s candidacy for the 2014-2015 non-permanent seat, which, he noted, had been endorsed by the Economic Community of West African States (ECOWAS) and the African Union.