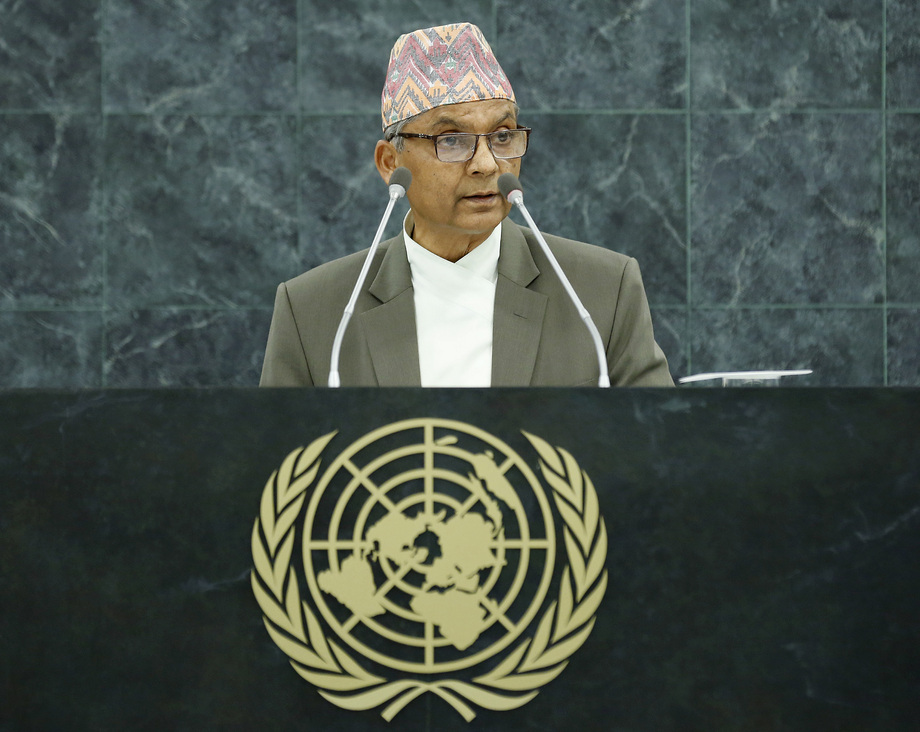 KHIL RAJ REGMI, Chairman of the Council of Ministers of Nepal, said that sustainable development would not be realized while pervasive poverty, unsustainable consumption and production patterns and environmental degradation continued. The sustainable development goals should build on the foundation of the Millennium Goals, ensuring that unfinished tasks were completed before embarking on a new agenda. Poverty eradication must be central to the new development agenda, he said, adding that the targets should work in the interests of poor and marginalized people.

Describing his country as the fifth most vulnerable to climate change risk, he said that it disproportionately bore the brunt, in stark contrast to its negligible contribution to greenhouse gas emissions. Calling for the early conclusion of climate change negotiations, he stressed the need for binding commitments on emissions and financing to enable vulnerable countries to adapt and mitigate. Nepal also faced structural constraints as a landlocked least developed country, he said, describing national efforts to integrate the Istanbul Programme of Action’s priorities while stressing the need for partners to help create enabling environments and genuine partnerships for speedy implementation. Nepal looked forward to the 10-year review of the Almaty Programme of Action and to forging a follow-up plan.

Like many other least developed countries, Nepal awaited a “harvest” from the Doha Development Round, he said, pointing out that 49 such nations accounted for a mere 1 per cent of global trade. Nepal expected the Bali Ministerial Conference, scheduled for December, to address the concerns of least developed countries, he said. The needs of poor and marginalized people like international migrants needed close attention, especially given the potential for migration to make globalization fairer for the world’s “bottom billion”. In line with the ideals of the Non-Aligned Movement, people-centric development was dependent on strengthened multilateralism. The Movement had a greater role to play in fostering international peace and security at the United Nations and beyond, and should pursue reform of the Organization and the Bretton Woods institutions.

As Nepal emerged from conflict, he said, it was vital to address exclusion, inequity, corruption and human rights violations, with a particular focus on unleashing women’s potential. Doing so would have great implications for advancing society as a whole, he said, adding that constitutional, legislative and institutional provisions guaranteed equal rights for Nepalese women. Facing a crucial crossroads in the peace process, the latest developments included a “slide into political uncertainty” in 2012, despite the dissolution of the Constituent Assembly. He said he had taken responsibility for arranging free, fair and credible elections for a new Constituent Assembly, and those were scheduled for November.