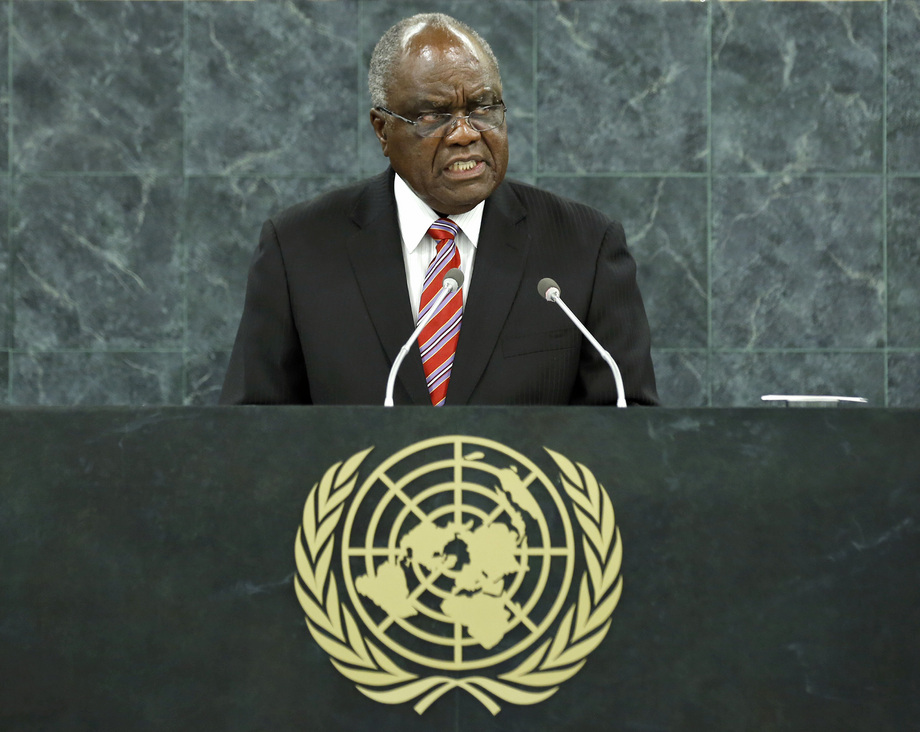 HIFIKEPUNYE POHAMBA, President of Namibia, said the theme of the new Assembly session echoed the preamble of the United Nations Charter — “to promote social progress and better standards of life in larger freedom” — and he stated that leaders were challenged to ensure that the post-2015 development agenda promoted sustainable development and a secure future. The Millennium Summit had emphasized the urgency of improving the world for humanity. The Millennium Development Goals had brought hope to millions living in poverty; however the 2015 deadline for achieving them had prompted the question as to whether the commitments made in 2000 had been lived up to.

He believed in a people-centred post-2015 agenda that was inclusive, focusing on health care, education, food security and nutrition, energy, water, gender equality and the empowerment of women, youth and people with disabilities. Climate change and environmental conservation should continue to receive attention and the world should commit to a new global partnership, characterized by solidarity, cooperation and mutual accountability. The Rio+20 [United Nations Conference on Sustainable Development] outcome document had identified poverty eradication as the greatest global challenge, making it central to sustainable development.

He said the eleventh Conference of Parties to the Convention to Combat Desertification was concluding its deliberations in Windhoek, and the Conference’s outcome could strengthen the Convention’s role in mitigating the effects of drought and desertification, particularly in Africa. Despite commendable advances by developing countries in social and economic development, challenges remained and the post-2015 agenda should account for the valid concerns of middle-income countries, such as access to grants and concessional funding. It should also embrace protection of fundamental rights and freedoms, the rule of law and international peace and security. Adequate and predictable financing was also vital.

Expressing his concern over growing instability worldwide, he welcomed signing of the Peace, Security, and Cooperation Framework for the Democratic Republic of the Congo and the region. He urged signatories to show good faith in implementing it and commended the Intervention Brigade to restore peace in eastern Democratic Republic of the Congo, calling on the international community to fully support the success of what was an important mission. Humanitarian assistance was also needed for those affected by the conflict, he noted.

Responding to other facets of the global agenda, he welcomed news that elections would be held in Madagascar, calling for international support, and welcomed the results of votes in Mali, where he commended the Economic Community of West African States for its resolution of the crisis there, and in Zimbabwe, where he said the Southern African Development Community and African Union Election Observer Mission had found those elections to be free, peaceful and credible. As a result, he said sanctions against Zimbabwe should be lifted unconditionally. The economic blockade against Cuba should also be lifted. Promising his continued support for the African Union’s work in Somalia, he expressed support for self-determination in Western Sahara and Palestine, going on to condemn chemical weapons use in Syria. Meanwhile, he stressed the urgency of Security Council reform to make it representative and democratic.